63-year-old Charmaine Keevy and her rescue Dachshund Georgie decided that it was their turn to pay it forward one day while on their daily walk.  What happened next left everyone in complete shock.

During a routine morning walk, Georgie was not acting normal.  He was entranced by a storm drain and began barking.  Charmaine thought she heard a faint meowing sound coming from the drain.  She decided to investigate. She bent down to check to see if there was a cat stuck inside but gasped at what was actually in there.  It wasn’t a cat – it was a human baby.

Since the drain was covered with a concrete lid, Charmain needed to get help.  She ran back to the road and flagged down the next person to pass.  Cornie Viljoen was the man who helped Charmaine.  They used a crow bar to pry the concrete lid open.  The drain was at least 6 feet deep, but Cornie acted on his adrenaline and jumped right in.

There were red ants everywhere and he suffered some stings on his legs, but he never even gave that a second thought – his only concern was rescuing that baby.

“The red ants were stinging my legs but then I felt this baby’s leg and then saw the baby and I realized that this was a crime scene so I took a flash picture and handed my phone up to Charmaine. I didn’t know if the baby was injured so I tried to pick her up very carefully and very slowly and she was so small. I just wanted to hold her for a while but I knew that she needed urgent medical help.”

Fortunately, the red ants had not reached the baby.  Thank God, because the baby was naked and still had the umbilical cord attached.  The duo quickly called local police.   The police and ambulance arrived and took the baby to the hospital.

According to police, the only way for the baby to have gotten in that drain was for someone to purposefully place her there and cover the drain with the concrete.

“There is a possibility that the person who did this may have come from outside the area and placed the child there. We are appealing for witnesses and the mother of this baby to come forward,” police spokeswoman Colonel Priscilla Naidu said.

The nurses and doctors at the hospital treated the baby for hypothermia and respiratory problems.  They determined she was in the freezing water drain at least a few hours.

Charmaine believes it was fate that brought her and Georgie to the baby because she normally takes a different walking path.  The baby has been named Grace April and is doing okay.

We are so glad Grace April survived this horrific ordeal.  We are thankful to Charmaine and Georgie for their quick thinking.

These two pups only had one thing left in life to keep them going each other.

The scared and heartbroken pups were living all alone in a parking lot and were crying for someone to help them.

But though they begged and begged, nobody seemed to care.

That is, until a young woman named Destiny Vasquez took pity on them and set off a chain of events that would change their lives forever.

Destiny Vasquez was waiting in line at a drive-thru in Brownsville, Texas, when she spotted a lonely pup in the restaurant’s parking lot.

Vasquez was immediately overwhelmed by compassion for the pup and called her mother crying.

She felt so bad for the pup who seemed to be completely alone in the world.

Vasquez told her mother that she had to save the poor pup, and her mother, Jessica Marin, agreed.

Marin is a true dog-lover and has rescued several pups in need over the years.

She headed over the parking lot where she was surprised to find not one, but two little dogs.

When Marin spoke with one of the restaurant’s employees, she found out that the pups had been living together in the parking lot for weeks.

Marin could not believe that the poor pups had had to suffer for so long.

Vasquez had captured a heartbreaking video of one of the pups, and Marin snapped a few pictures of pair before sending the video and the photos to her contact Leslie Ysuhuaylas Hennings.

She posted Vasquez’s video and Marin’s photos on Facebook and urged people to help them find a foster home.

“They literally begged to be taken, but they weren’t. They go up to every car that passes by in hopes to find a home,” Hennings wrote.

The Facebook plea soon reached Ana Teran, a volunteer for Animal Aid Brigade in Houston, who was devastated to hear about the poor dogs’ plight.

Teran immediately rented a car and drove all the way from Houston to Brownsville to collect the pups.

After spending some time gaining their trust, Marin managed to coax the pups into her car and was able to drive off and meet up with Teran.

When the pups met Teran, they very happy and excited. They didn’t seem scared of her and were just excited to see what would happen next.

Teran was completely smitten by the sweet pair and gently loaded them into her car.

After getting the pups safely onboard, Teran decided to make a few more stops and rescue some more dogs before heading back.

Nine pups later, Teran was ready to bring the whole gang back to Houston.

Back in Houston, Teran decided to become the parking-lot-pups’ new foster mom.

She named them Patty and Pepper, and the pair were thrilled to get to live with Teran.

The pups are sweet and affectionate and like to stick close to each other. They are clearly very bonded and love each other deeply.

Patty and Pepper are so happy that someone finally listened to their cries for help and helped them find a loving home.

They are very grateful to Teran, and enjoy every minute they get with her, but they are also excited to start the next chapter in their life; soon, the pair will be ready for adoption, and will finally get their very own forever family!

The sweet pair has received a lot of love and support online, and everyone is so happy that they’re finally safe.

Saving a life is no easy task, but saving five little lives is even harder to do! Yet the two beautiful Dalmatians you see in the video below have no problem with looking after a life in need, even if it isn’t one of their own.

Dalmatians Louie and Lady are no strangers to raising and nurturing puppies, and they apparently also do a great job taking care of kittens. 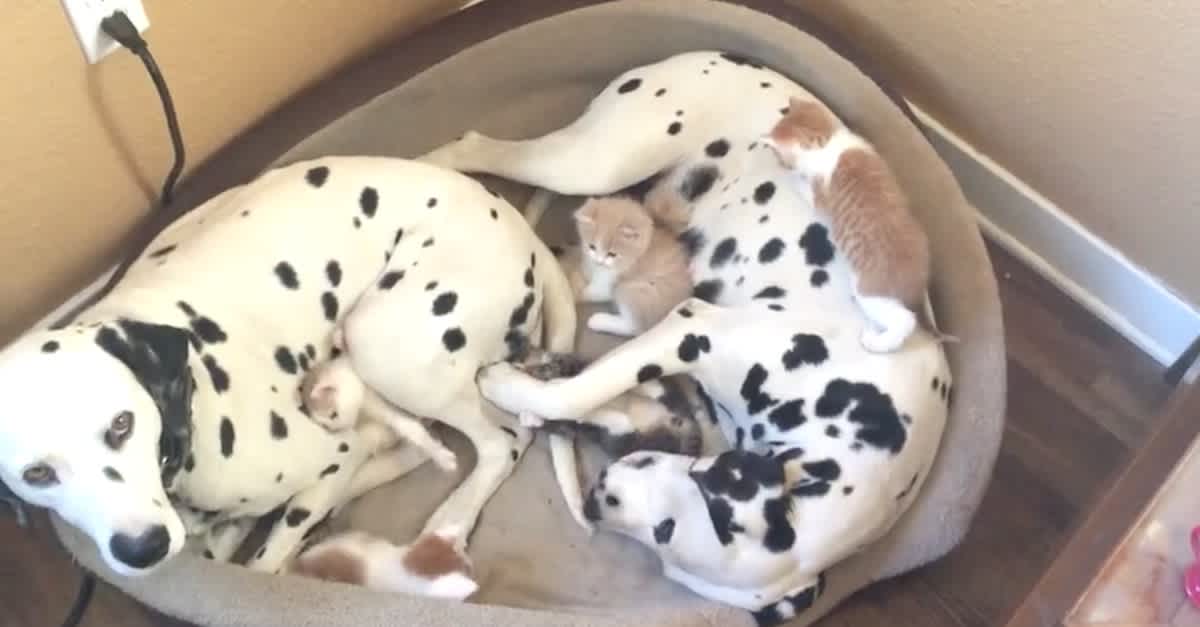 The couple has adopted no less than 5 little kittens, and together they look like the perfect family, as it has come to the point where these kittens recognize the loving dogs as their parents.

Seeing how peaceful and happy they all look together, it’s hard to believe they are not all of the same species. As it turns out, cats and dogs can get along just fine. Or maybe that only applies to kittens and dogs. Oh well, it’s a start.