This Fourth of July, as you watch the sky light up with red, white and blue, remind yourself of the meaning behind the holiday with these 22 quotes about freedom: “I am no bird; and no net ensnares me: I am a free human being with an independent will.” – Charlotte Bronte 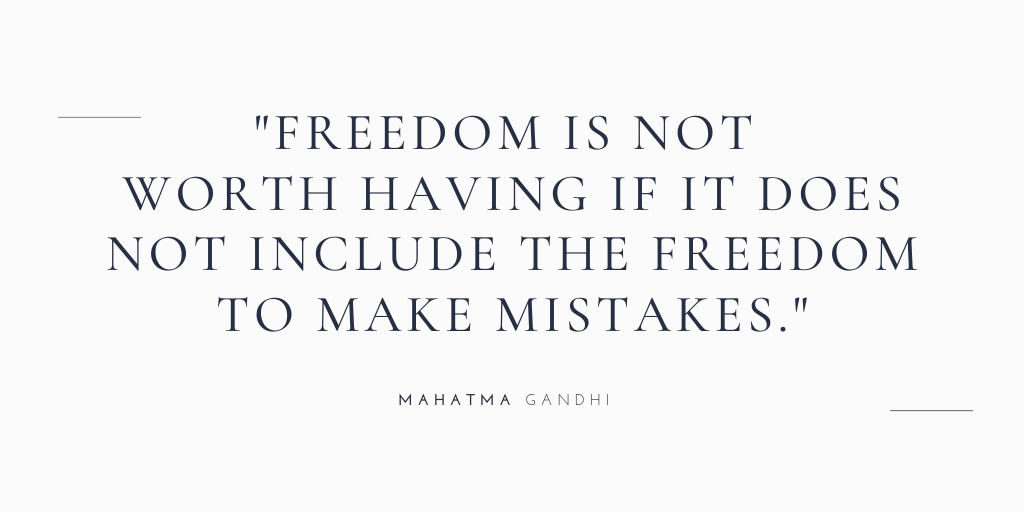 “Freedom is not worth having if it does not include the freedom to make mistakes.” – Mahatma Gandhi

3. Embrace the feeling of wonder. “The only real prison is fear, and the only real freedom is freedom from fear.” – Aung San Suu Kyi “May we think of freedom not as the right to do as we please, but as the opportunity to do what is right.” – Peter Marshall “Dreams are the foundation of America.” – Lupita Nyong’oCLICK TO TWEET “In the truest sense, freedom cannot be bestowed; it must be achieved.” – Franklin D. Roosevelt “We must be free not because we claim freedom, but because we practice it.” – William Faulkner “America is another name for opportunity.” – Ralph Waldo Emerson “Freedom is the open window through which pours the sunlight of the human spirit and human dignity.” – Herbert Hoover “This, then, is the state of the union: free and restless, growing and full of hope. So it was in the beginning. So it shall always be, while God is willing, and we are strong enough to keep the faith.” – Lyndon B. Johnson “Is freedom anything else than the right to live as we wish? Nothing else.” – Epictetus “Freedom means the opportunity to be what we never thought we would be.” – Daniel J. Boorstin

17. Leave it better than you found it. “For to be free is not merely to cast off one’s chains, but to live in a way that respects and enhances the freedom of others.” – Nelson Mandela

18. Embrace the power of hard work. “Everything that is really great and inspiring is created by the individual who can labor in freedom.” – Albert Einstein “The essence of America—that which really unites us—is not ethnicity, or nationality, or religion. It is an idea—and what an idea it is: that you can come from humble circumstances and do great things.” – Condoleezza Rice “Life without liberty is like a body without spirit.” – Kahlil Gibran Editor’s note: This post was originally published in July 2016 and has been updated.
Photo by insta_photos/Shutterstock Dads are often the closest thing we have to real-life superheroes. They are strong and brave, total legends. They’re also… The idea of happiness and long happy life has existed in the world for a long time. The democratic, philosophical,…