Suga once wrote a letter about his ex-girlfriend. 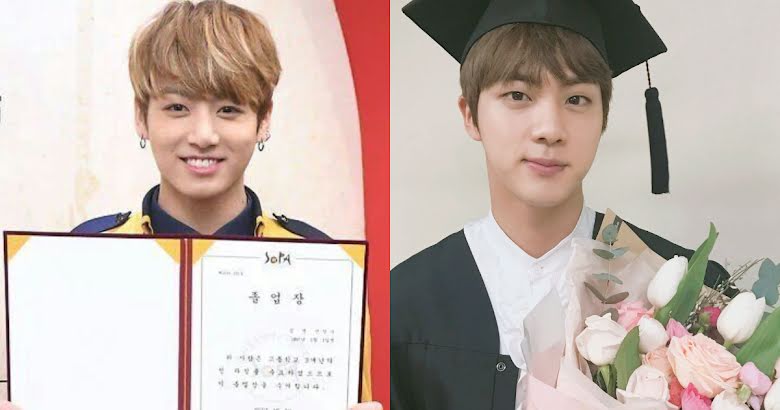 1. V thinking that Jimin was getting bullied

When Jimin transferred to V’s high school, V introduced Jimin to all his friends and teachers.

However, during a break, V saw Jimin alone, and he got angry at his friends since he thought they were ostracizing Jimin.

I was surprised, so I got angry at my friends and said, ‘Why are you not talking to my friend?’

V’s friends then told V that this was all a misunderstanding. V’s friends tried talking to Jimin, but Jimin was shy and didn’t talk much.

I talked for 20 minutes, but Jimin only answered my questions. He was quiet, so I stopped talking.

2. Jin telling his professor why he would be missing class

When Jin was a student at Konkuk University, he also was busy with his BTS activities. On an online community board, a user whose father was Jin’s professor in university spoke a bit about Jin.

The user shared that Jin was extremely polite and well-mannered. Jin often had to miss class because of his busy idol life, but he would always text his professor about missing class.

One of the most memorable texts this professor received was when Jin told him that he would miss class because he would be performing at the Mnet Asian Music Awards (MAMA)!

Hello professor, this is BTS’s Jin. I am currently in Hong Kong to perform at the Mnet MAMA and will not be able to make it to class. I am very sorry.

Jungkook graduated from the School of Performing Arts (SOPA) in 2017. During his graduation ceremony, lots of fellow students helped Jungkook.

A student by the name of Choi Hye Jeong went to SOPA at the same time as Jungkook. When Jungkook arrived at the graduation ceremony, the school was filled with fans and reporters.

Some of the fansites present at the ceremony put their cameras on the shoulders of the students forming the barricade to get a shot of Jungkook.

To protect Jungkook’s privacy, the student council staff used their thumbs to swipe across the lens of these cameras to smudge them!

4. Suga’s love letter to his ex-girlfriend

When Suga was in middle school, he submitted a letter to a local radio host.

In this letter, he spoke about his ex-girlfriend and how they got together and eventually broke up.

I’m embarrassed that I’m writing a letter to a radio that I’ve always listened to. Our Korean language teacher asked us to write a letter that could be sent to a radio.

I was contemplating on what to write, and I decided to write about my past love while reading Hwang Dong Kyu’s ‘Enjoyable Letter’.

3rd year of middle school, it might be a tender age to say that one’s in love. But it was a memory that held my true feelings from those heart aching memories.

I’m embarrassed to say but I liked a girl last year in my 2nd year of middle school.

Since I’m very shy, I wasn’t able to talk to her, so we stayed friends.

I became greedier as we got closer. I didn’t want to stay a friend, so I confessed my feelings.

But she said yes when I confessed I liked her.

We ended up dating but that’s when the problems started. Because I was so shy, I couldn’t act naturally with her now that she was my girlfriend.

I didn’t pay attention to her and compared to how our relationship was when we were just friends, there was a clear difference. Our relationship became awkward more than anything.

We didn’t date that long and due to all these problems she said let’s just be friends and broke off the relationship. When I heard those words I felt like a side of my chest was hollow. I felt deserted.

Suga also wrote in the letter about how he reflected on this relationship and apologized and wished his ex-girlfriend all the best!

I truly understood where she was coming from when she broke off the relationship and I went into reflection after that.

I would think about everything I did wrong and how I could better myself. I also think back now about those days and wish I would’ve behaved differently.

If I could go back, I would treat her way better and I know I could do more for her. I would tell her I loved her and liked her proudly.

Thinking back to those days is hurtful and regretful for me. If she’s hearing me speak this confessional letter I want to say the following to her.

I am very sorry for treating you that way. You must’ve felt so hurt when I behaved like that. I personally think back and look at it as a good memory now.

Thank you for making that memory with me.