Angelina Jolie celebrated her 46th birthday surrounded by all six of her children on Friday night.

In pictures exclusively obtained by DailyMail.com, the actress was seen leaving TAO restaurant in LA with Maddox, 19, Pax, 17, Zahara, 16, Shiloh, 15, and 12-year-old twins Vivienne and Knox.

In a true sign it was indeed a special occasion, she swapped her signature goth black wardrobe for a bright yellow floaty knee-length frock, nude heels and a Valentino handbag.

Angelina – who stars as a firefighter Hannah Faber in her new Netflix film Those Who Wish Me Dead – and her family all wore masks as they left the West Hollywood hotspot together.

Birthday dinner: Angelina Jolie celebrated turning 46 on Friday with a dinner at LA’s TAO restaurant with her six children 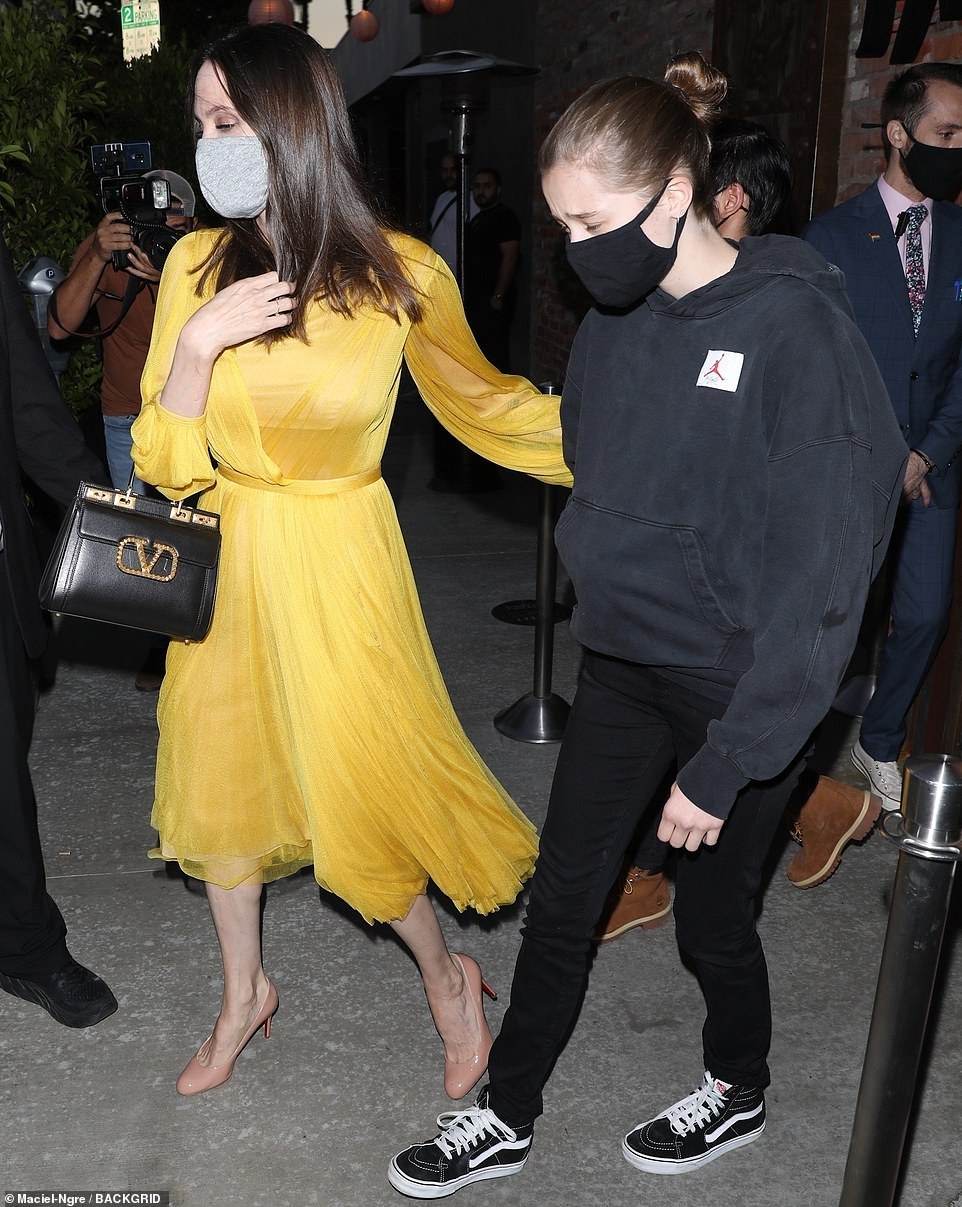 Brave face: Angelina, seen here with her 15-year-old daughter Shiloh, has endured a difficult few weeks after being left ‘bitterly disappointed’ by a judge’s decision to award Brad Pitt joint custody of their minor children

It follows a difficult few weeks for the actress, who was left ‘bitterly disappointed’ when her ex husband Brad Pitt was awarded joint custody of their children following a long and very nasty legal battle.

In late May, the court ruled that Brad and Angelina will have shared custody of all their children with the exception of Maddox, who is no longer a minor.

According to reports from US Weekly on Tuesday, the actress feels she can ‘never forgive’ Braid and believes their legal battle is ‘far from over’.

Family fun: Her sons Pax, 17, and Maddox, 19, were spotted at the West Hollywood restaurant

Take out bag! Zahara took home leftovers from dinner in a Tao tote

A source told the publication: ‘She will never forgive him… She maintains it’s far from over and still believes that justice will prevail.’

It was also claimed that the Maleficent star will give ‘everything she’s got’ to appeal the decision in court.

Brad’s representatives declined to comment when approached by MailOnline last week and spokespeople for Angelina were also contacted for further comment.

Sources believe Angelina will continue fighting the custody arrangement, as she reportedly thinks there were ‘issues’ with the way Judge John Ouderkirk handled their court proceedings.

Angelina Jolie on stepping back to spend time her six children

The source added: ‘Joint custody is not the issue that Angelina objects to, there were other issues of concern, but the court proceedings are closed and sealed.’

Angelina and her legal team claimed the judge wouldn’t allow her children to testify in court.

A filing made to California’s Second District Court of Appeal read: ‘Judge Ouderkirk denied Ms. Jolie a fair trial, improperly excluding her evidence relevant to the children’s health, safety, and welfare, evidence critical to making her case … They have failed to adequately consider a section of the California courts code, which says it is detrimental to the best interest of the child if custody is awarded to a person with a history of domestic violence.’

Angelina believes the court should be able to ‘hear the minor teenagers’ input as to their experiences, needs, or wishes as to their custody fate’, but this has been refused.

However, Brad’s lawyers believe the proceedings have been conducted fairly.

Looking on the bright side: Angelina swapped her signature black wardrobe for a yellow party frock 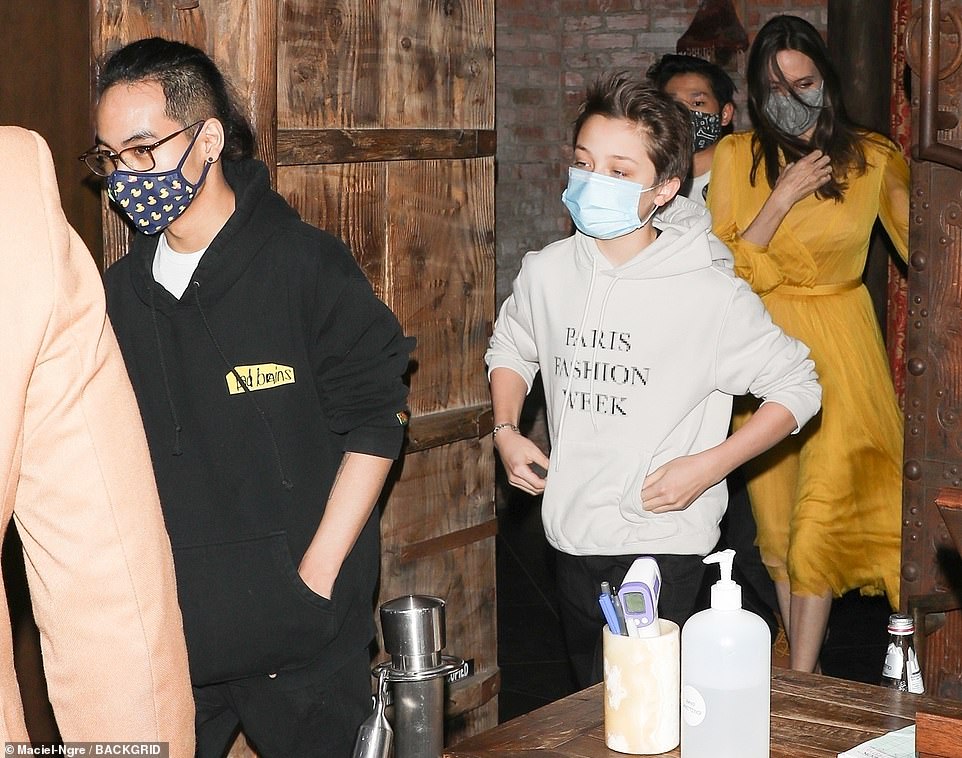 Mom’s special day: Her children were out in force on the actress’ birthday 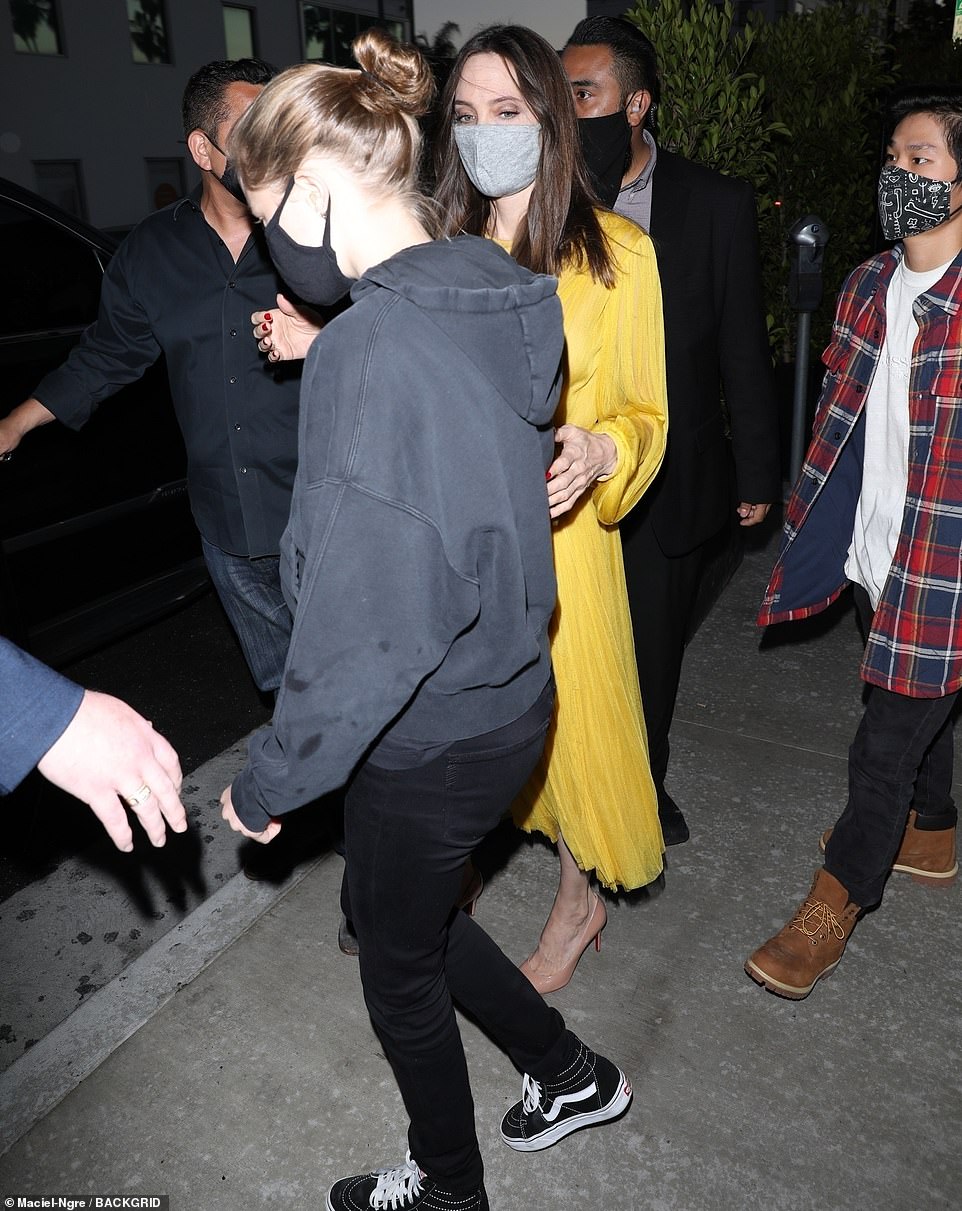 Custody war: Last month, a court awarded Brad (pictured with Angelina in 2014) joint custody of their children with the exception of Maddox who is no longer minor

In a response filing made to the courts, they said: ‘Ouderkirk has conducted an extensive proceeding over the past six months in a thorough, fair manner and reached a tentative ruling and order after hearing from experts and percipient witnesses. [Angelina’s testimony] lacked credibility in many important areas, and the existing custody order between the parties must be modified, per Mr. Pitt’s request, in the best interests of the children. [The objections are causing] grave harm upon the children, who will be further denied permanence and stability.’

Brad and Angelina met and by their own admission ‘fell in love’ while filming Mr and Mrs Smith in the summer of 2004 while he was still married to Jennifer Aniston.

After a controversial start, they quickly became Hollywood’s golden power couple and quickly grew their family.

They eventually married in 2014 at their Chateau Miraval in France in front of all six of their children.

But by August 2016, their high-profile romance had collapse and Angelina filed for divorce and requested primary custody of their children, marking the beginning of the long and ugly legal war.

In 2019, Pitt revealed that he turned to Alcoholics Anonymous (AA) after his split from Angelina because his drinking had got out of control.