Stopping at the gas station in the town of Mogi das Cruzes in Brazil could turn out to be a very pleasant experience. The reason being that you could be greeted by their sweetest employee a puppy named Negao.

He would actually make your day great at a small Shell gas station. Don’t expect him to fill gas as he may not be able to do that but he could definitely bring some happiness to customers.

Negao, the dog was found on the gas station two years ago by Sabrina Plannerer. At that time, the gas station was under construction and Plannerer saw the black boy walking there. It appeared as if his former owner abandoned him there and the dog was so scared that he didn’t want to leave.

Plannerer loved the dog and adopted it. The dog was neutered, vaccinated, and looked after well. After some time when the gas station opened, Negao was one of the employees working there. 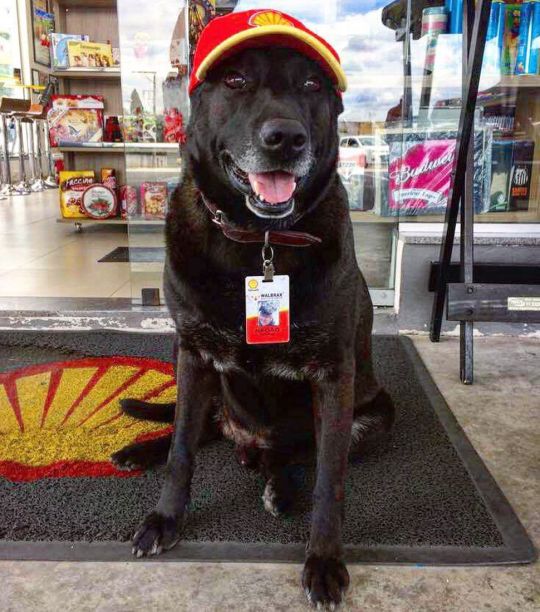 Whoever comes there falls in love with him. He makes sure to keep his employees happy. In return, Negao was showered with lots of love and affection. His employees try to keep him safe at the workplace.

Negao is an official employee at the station, he got his own name badge. He also helps to promote a charity group named Grupo FERA, its purpose is to place stray dogs with businesses like the shell station. Sometimes stray dogs didn’t find a forever home so this type of work would make their life comfortable.

Negao wins everybody’s heart with his outfit. We want more gas stations with such employees. Do you agree?