Blink-182 singer Mark Hoppus has announced he is battling cancer.

The musician, 49, revealed he had been undergoing chemotherapy treatments for the past three months in a statement posted to his Instagram Stories on Wednesday.

‘For the past three months I’ve been undergoing chemotherapy for cancer. I have cancer. It sucks and I’m scared, and at the same time I’m blessed with incredible doctors and family and friends to get me through this. 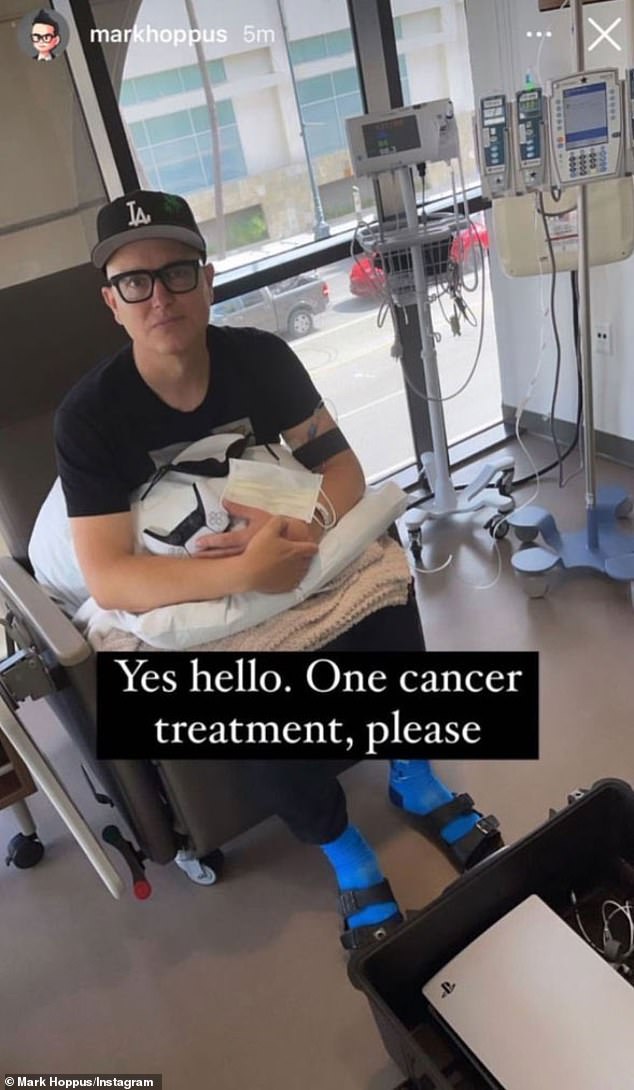 ‘I still have months of treatment ahead of me but I’m trying to remain hopeful and positive. Can’t wait to be cancer free and see you all at a concert in the near future. Love to you all.’

While he did not reveal at what stage his cancer was at or what type he is currently battling, he did earlier share a photo of himself seemingly in the midst of treatment.

The photo, posted to his Instagram Stories, captured Mark sitting with an IV in his arm. It was deleted not long after.

‘Yes hello. One cancer treatment, please,’ he wrote in the snap. 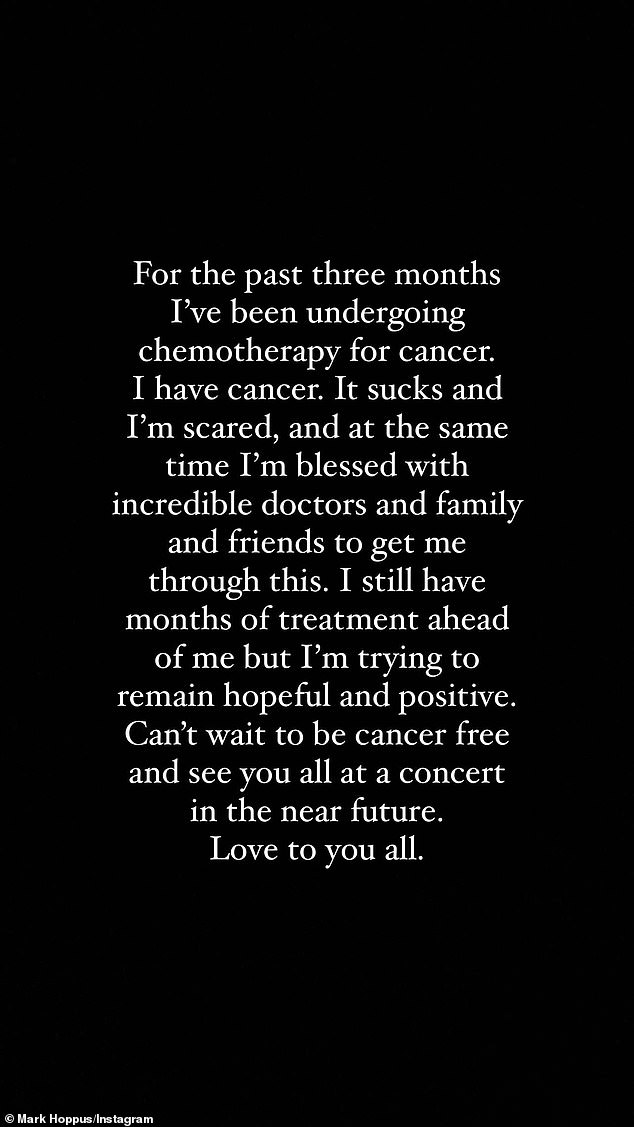 ‘Can’t wait to be cancer free’: The musician, 49, revealed he had been undergoing chemotherapy treatments for the past three months in a statement posted to his Instagram stories on Wednesday 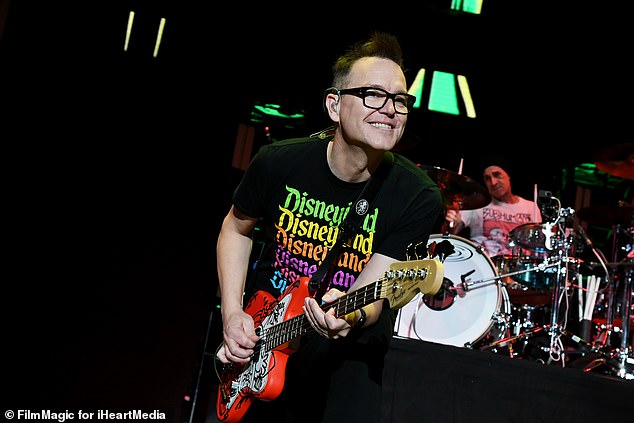 Hang in there: Concerned fans immediately sent their well-wishes to the musician on social media, urging him to remain strong amid the health crisis 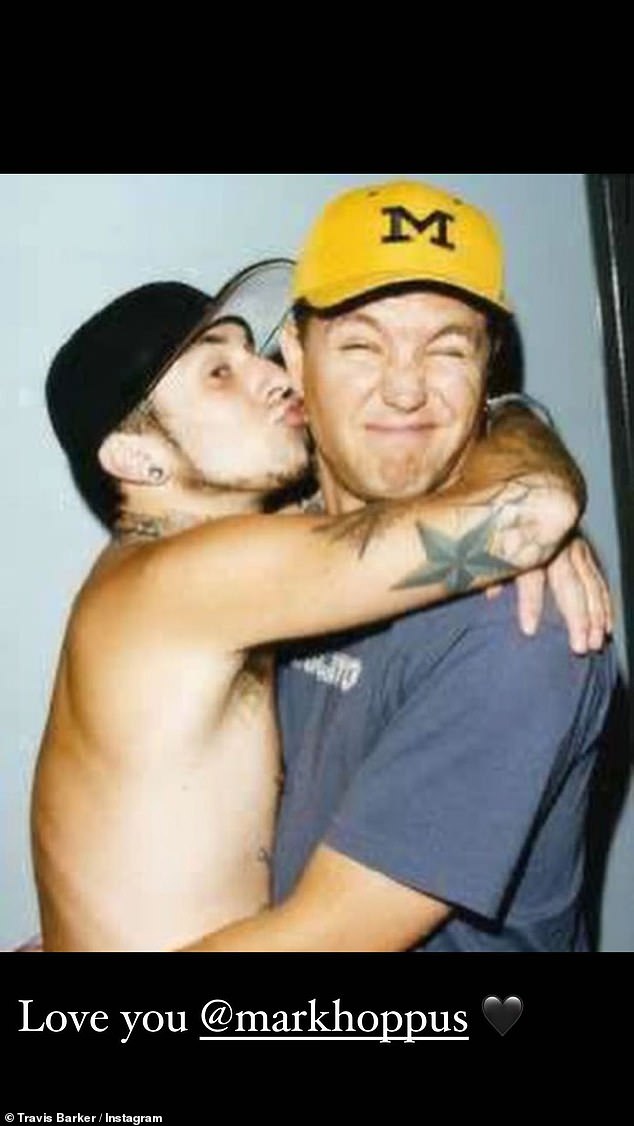 Posting a photo of the duo sharing an embrace, the drummer wrote in the snap, ‘Love you @markhoppus (black heart emoji).’

Concerned fans immediately sent their well-wishes to the musician on social media, urging him to remain strong amid the health crisis.

‘Thought @markhoppus from my favourite band @blink182 had been quiet on here recently and just seen on his Instagram that he is fighting cancer. This really is the worst news. Stay strong Mark and hope to see you back on stage soon!’ tweeted @CW_182. 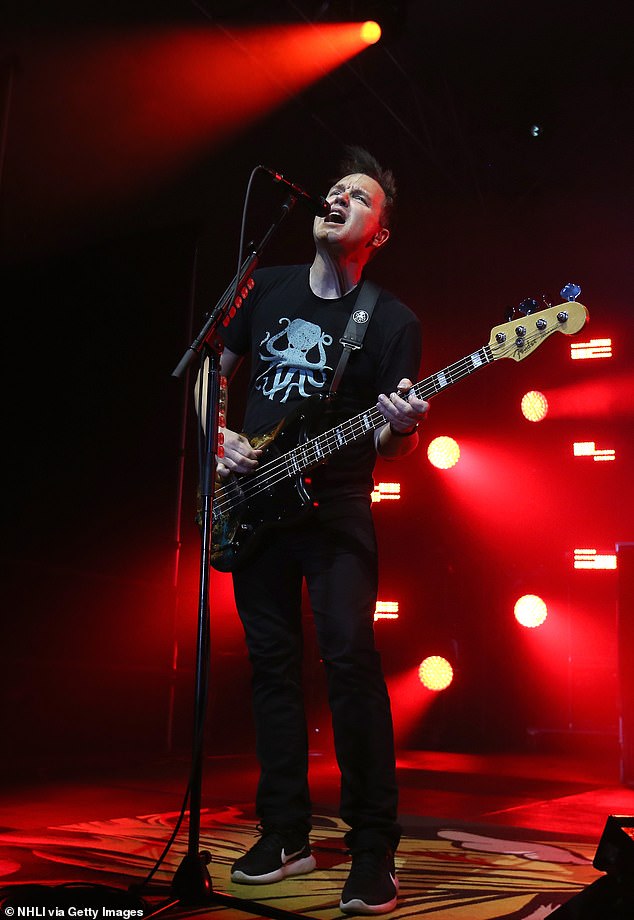 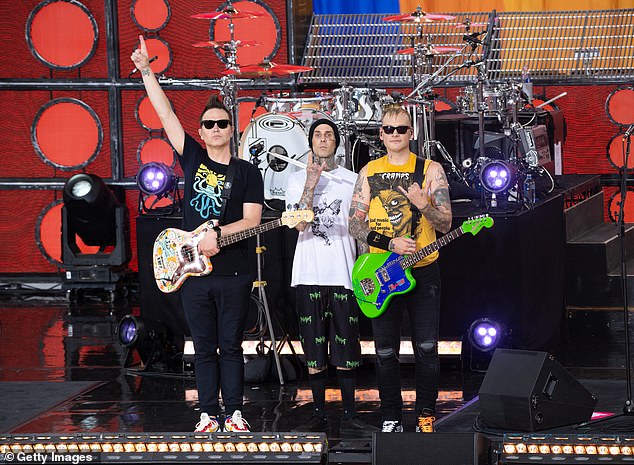 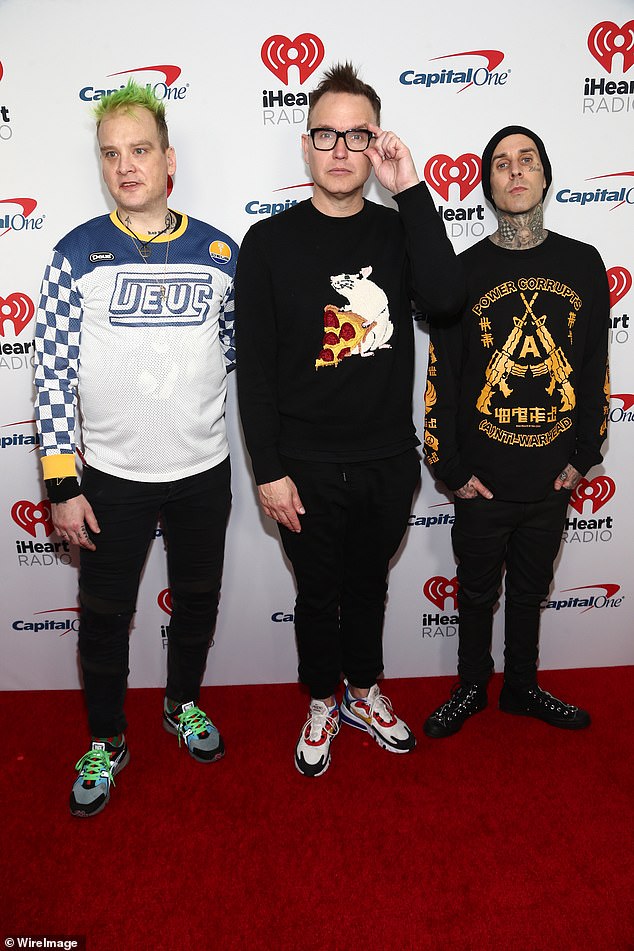 Smash success: The band was the recipient of a Grammy nomination in 2017 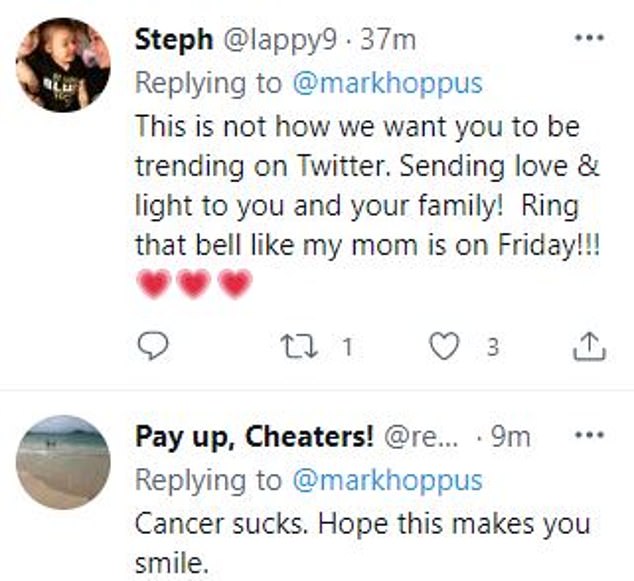 ‘I met you in 2016 and it was the best day of my life, earlier this year when I was going through my own battle w chemotherapy, blink-182 got me through it,’ @whoiswill_ tweeted. ‘You have entertained and brought so much happiness and joy to so many including myself over the years. Hang in there Mark.’

Mark formed the wildly successful band back in 1992 with Tom DeLonge and Scott Raynor, both of whom are no longer in the band.

The group would enjoy smash success over the years with the hits All The Small Things, I Miss You, and a Grammy nomination in 2017 for Best Rock Album. 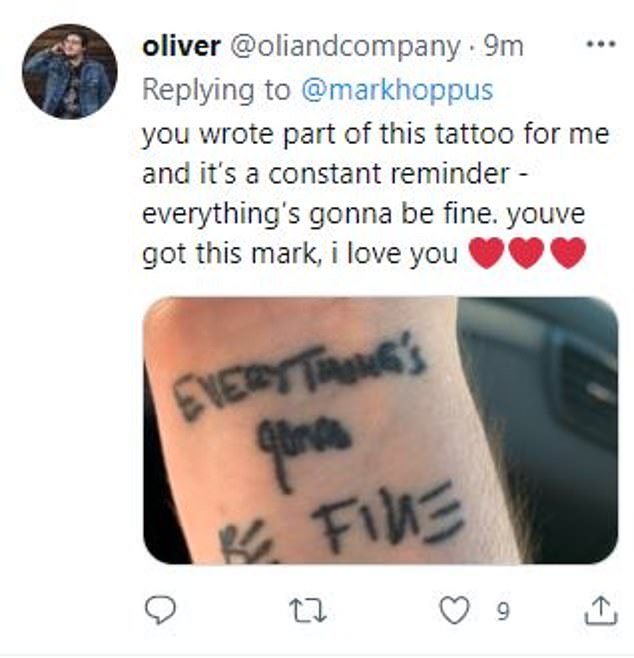 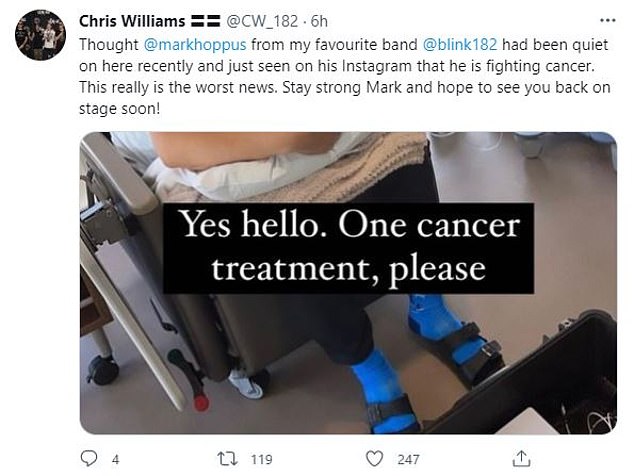 Notable works include the five times platinum album Enema of the State and Take Off Your Pants And Jacket, which in 2002 went double platinum.

The last time the band, which now consists of Mark, Barker, and Matt Skiba, released an album was 2019’s Nine.

Matt said the record was meant to encapsulate the human experience.

‘The world is in a really strange place right now,’ he told Vogue at the time. ‘This record is about being a human being in 2019: the joy, fear, and anxiety of it.’

‘I really wanted to put it all out there on this record: every self-doubt and dark thought,’ he added of the work. ‘The parts of yourself that you work hard to hide from the world every single day. Those are the things people relate to.’ 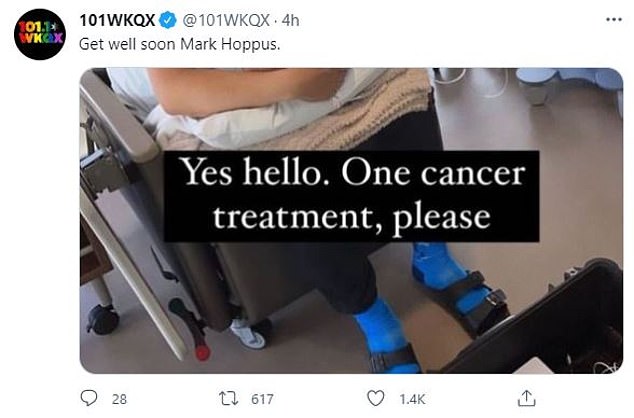 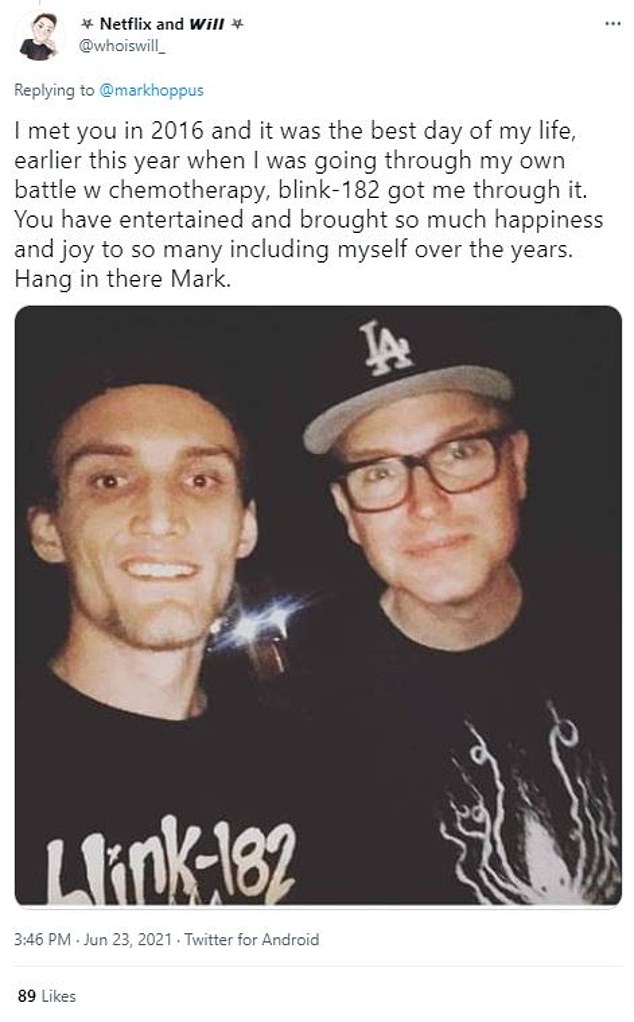