She tied the knot with her musician husband Benji Madden in 2015.

Cameron Diaz and the Good Charlotte guitarist managed to find some time to themselves on Saturday night when they went out in Santa Monica for a romantic dinner date at the upscale Italian restaurant Giorgio Baldi.

The 48-year-old actress cut a casual yet stylish figure during the evening in a classy charcoal gingham blazer. 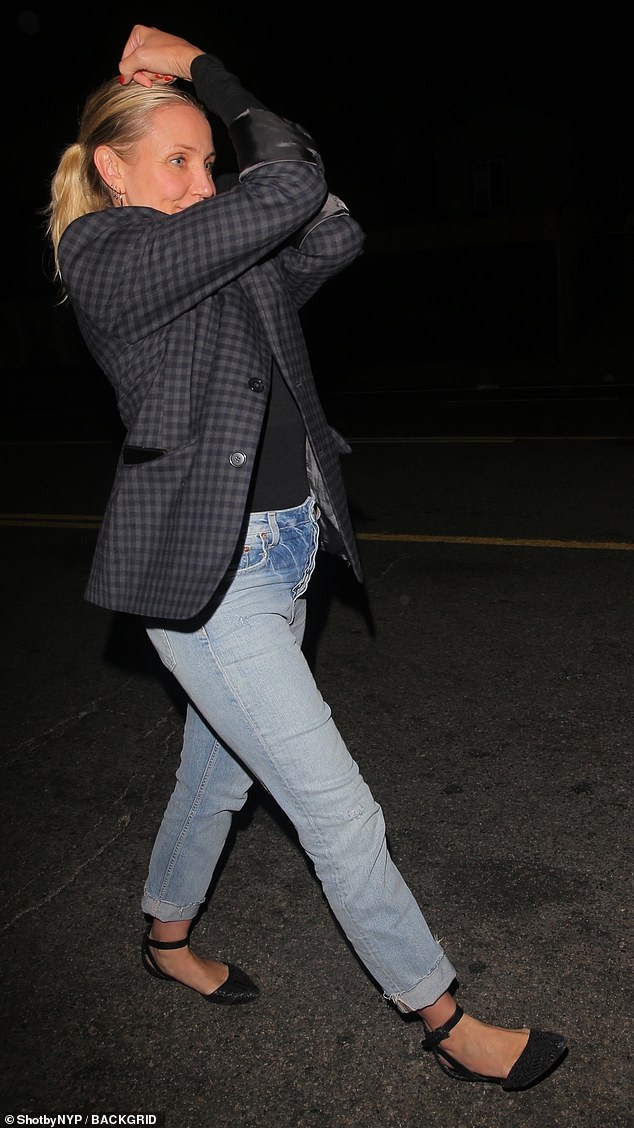 Cameron took a page from 1980s style by rolling up her jacket’s sleeves to show off the gray satin lining.

She kept the rest of her ensemble casual with a form-fitting black long-sleeve top that she tucked into her high-waisted acid wash jeans, which she wore cuffed.

The Vanilla Sky star opted for comfortable footwear with a set of black flats that strapped around her ankles.

She wore several small earrings and studs and had her long blond hair tied back in a simple ponytail. 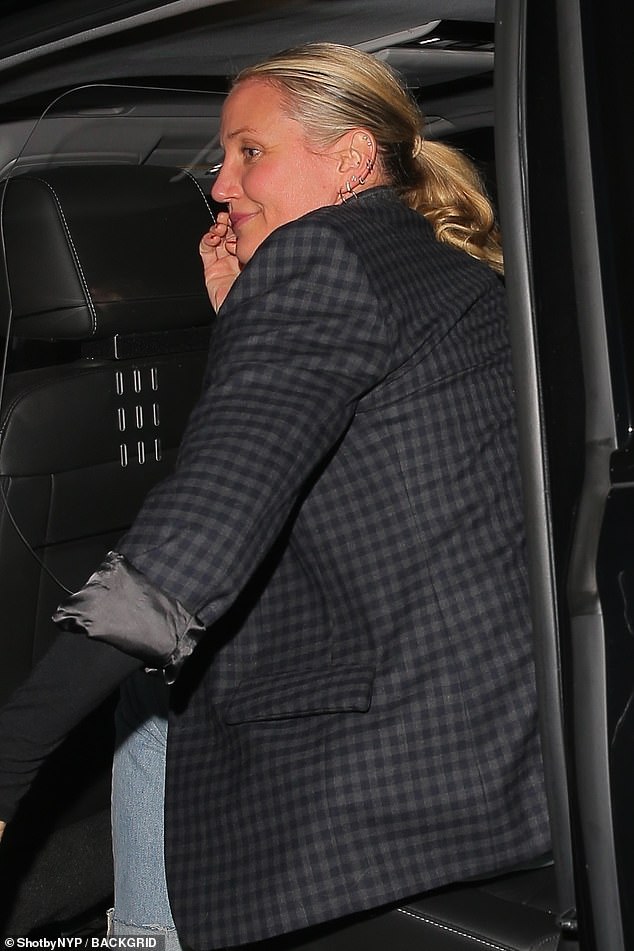 No fuss: She kept the rest of her ensemble casual with a form-fitting black long-sleeve top that she tucked into her high-waisted acid wash jeans, which she wore cuffed

Cameron was spotted heading out of the Giorgio Baldi, a popular spot for celebrities, and heading to her car.

The former actress and her husband Benji, 42, have been together since the summer of 2014, when they were introduced by his sister-in-law Nicole Richie.

The couple got engaged in December of that year, and they had a quick turnaround for their wedding in January 2015 at her home.

The lovebirds expanded their family in December of 2019 when they welcomed their first child, a daughter named Raddix. 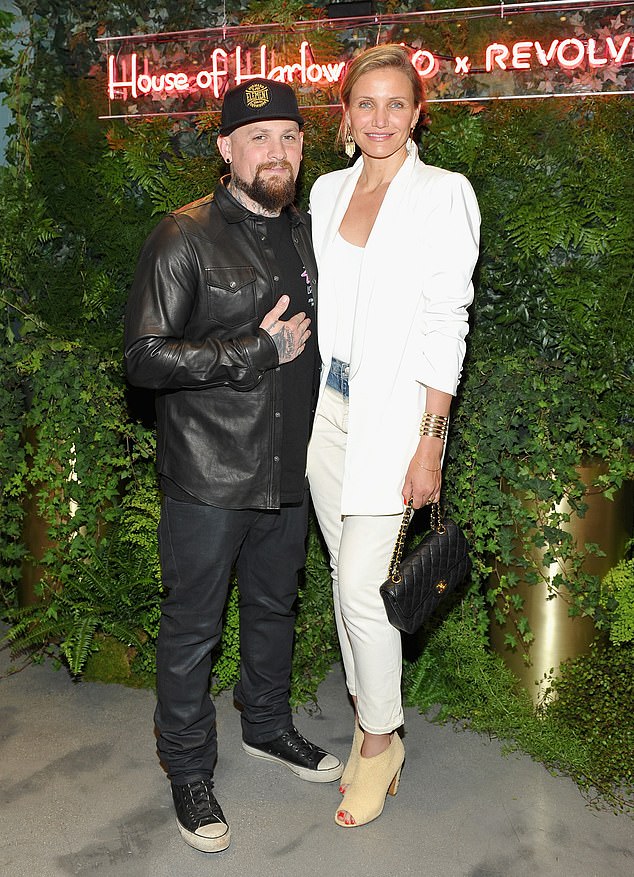 Quick courtship: Cameron was introduced to Benji, the lead guitarist for Good Charlotte, by his sister-in-law Nicole Richie in 2014. The couple married in January of 2015; seen in 2016 in LA

Though Cameron is best known for starring in several popular films in the last few decades, going back to her 1994 feature debut The Mask, she has been quietly retired from acting ever since a final string of commercially successful films in 2014.

It wasn’t until 2018 that she shared with Entertainment Weekly that she was ‘actually retired,’ and she didn’t share more about her reasons for leaving the world of film until an interview with Gwyneth Paltrow for Goop from August of 2020.

‘It’s a strange thing to say. I know a lot of people won’t understand it,’ she said of her retirement. ‘But it’s so intense to work at that level and be that public and put yourself out there. There’s a lot of energy coming at you at all times when you’re really visible as an actor and doing press and putting yourself out there. I’m sensitive to some energies and not others, but I do get the overwhelming energy of the attention being put towards me. I stopped, I really looked at my life, and I saw what I had been [missing].’

She added that she felt like she was owned by the studios when she was working on a film. 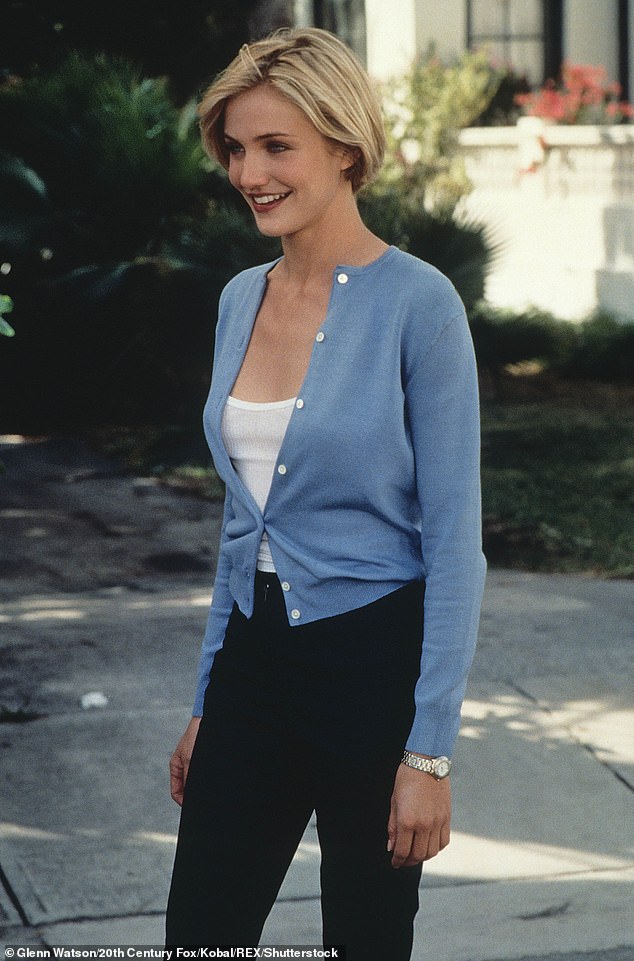 New path: She’s best known for her film roles, but the actress quietly retired after 2014 because she felt like she was being overworked by Hollywood; still from There’s Something About Mary (1998)

‘You’re there for 12 hours a day. For months on end, you have no time for anything else. I realized I handed off parts of my life to all these other people and they took it,’ she said.

More recently, the Being John Malkovich actress has hopped on the celebrity entrepreneur bandwagon with her own wine label, Avaline.