It was previously reported that a cosmetic brand LALALEE’S had applied for copyright for the term “BORAHAE” according to the KIPRIS site.

BTS’s fans, ARMY, took action and requested that the copyright be canceled.

Recently, the brand posted an apology statement online apologizing to BTS’s fans and revealed they would give up copyrights. 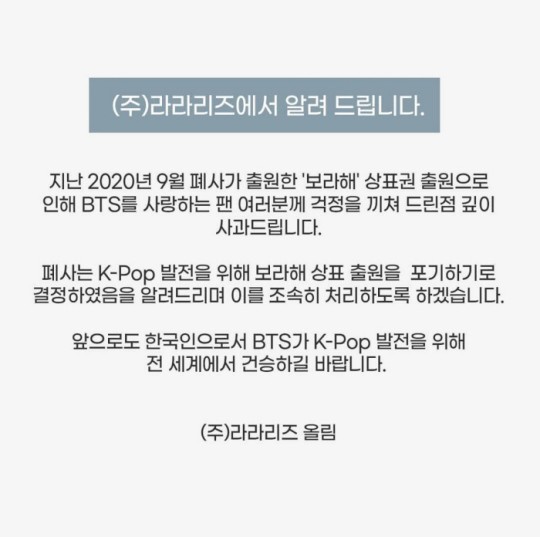 Last September 2020, our company requested the copyrights for the term ‘BORAHAE’, and we truly apologize to the fans that love BTS for causing concern.

Our company has decided to give up copyrights to the term for the further development of K-Pop and we will take action as soon as possible.

Going forward, as Koreans, we wish BTS good luck in their future endeavors in spreading K-Pop to the world.

The term “BORAHAE” was a term created by member V to refer to the last color of the rainbow, purple, meaning that both the group and fans will love each other until the end.