Kerry Katona has candidly reflected on her relationship with late ex-husband George Kay, saying he would ‘spit in her face’.

The singer, 40, revealed that she even hid in a cupboard with one of her daughters because she was so terrified of him in an interview with Ulrika Jonsson in The Sun.

George died from a drug overdose in July 2019 at the age of 39 and Kerry has often claimed to have suffered domestic violence during their three-year marriage. 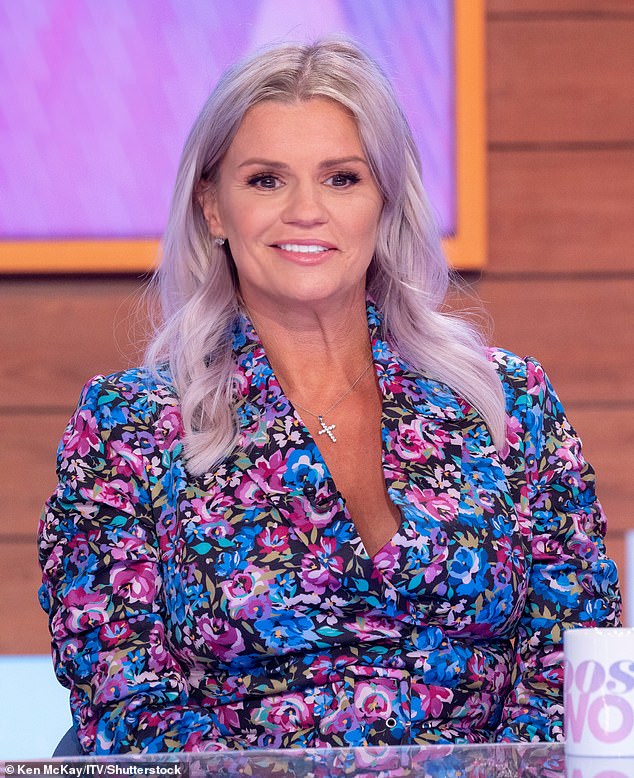 Candid: Kerry Katona has reflected on her relationship with late ex-husband George Kay, saying he would ‘spit in her face’ (pictured on Loose Women in March 2020)

Speaking with Ulrika, Kerry recalled locking herself and her child in a cupboard and added that George once threatened to rape her and her mother.

Speaking about abuse, Kerry said: ‘The worst thing he did was spit in my face… I got to the point where I would rather take a good beating than have him spit in my face.’

The mother-of-five also detailed how she would hide bruises before appearing on TV, however said the worst thing was her older daughter seeing what was happening.

George was found dead at the age of 39 following a drug overdose and during their marriage he had battled mental health issues. 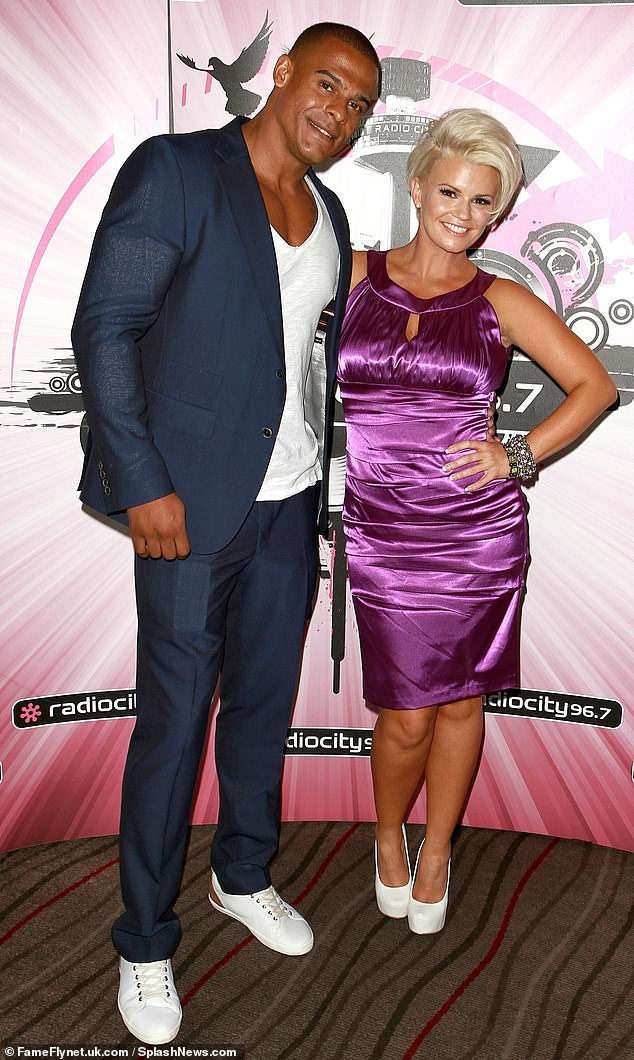 Exes: The Atomic Kitten singer, 40, was married to George for three years before he died from a drug overdose in July 2019 at the age of 39 (pictured together in 2013)

He and Kerry tied the knot in 2014 and shared daughter Dylan-Jorge, seven. Kerry is also mum to Molly, Lily, Max and Heidi.

The former Atomic Kitten star also emphasised to her friend how ‘hard’ it feels to leave a violent relationship.

And although battling tough relationships, with Kerry also saying her first husband Brian McFadden was unfaithful, the star detailed how she’s now happy.

Kerry is engaged to fiancé Ryan Mahoney and although thinking it would be ‘selfish’ to have another child she’s not against the idea and has frozen her eggs just incase her beau wants a baby. 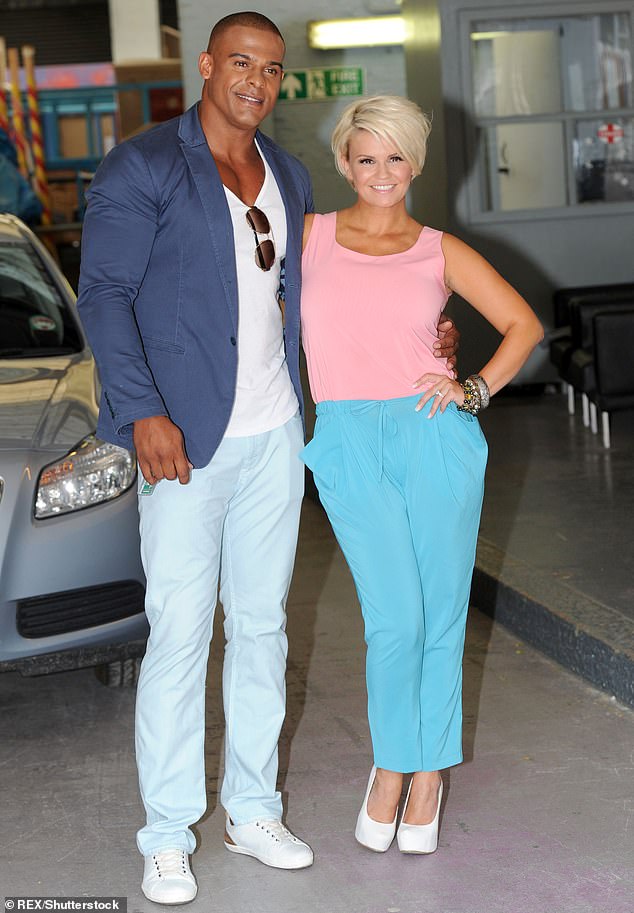 Awful: The mother-of-five also detailed how she would hide bruises before appearing on TV in the interview (pictured with George in 2013)

Turning her thoughts to why she’s been married multiple times, Kerry told Ulrika that she thinks it’s to do with not having a ‘nuclear family’ as a child herself.

She explained: ‘I didn’t stop to realise how much my kids loved me. It wasn’t so much that they needed a dad, it was me craving that nuclear family.’

Elsewhere in the candid interview, Kerry spoke about her latest business venture, an OnlyFans account.

Kerry revealed to Ukrika her page has made its first £1million – and even encouraged her to make her own profile on the site.

Reflecting on how she’s worked since she was 14, twice bankrupt Kerry said she’s got no problems with taking racy pictures and selling access on the site.

She detailed how those who question her decision need to ask themselves what the difference with between paparazzi making money of snaps of her on the beach and her ‘taking control’ and making the money herself with OnlyFans. 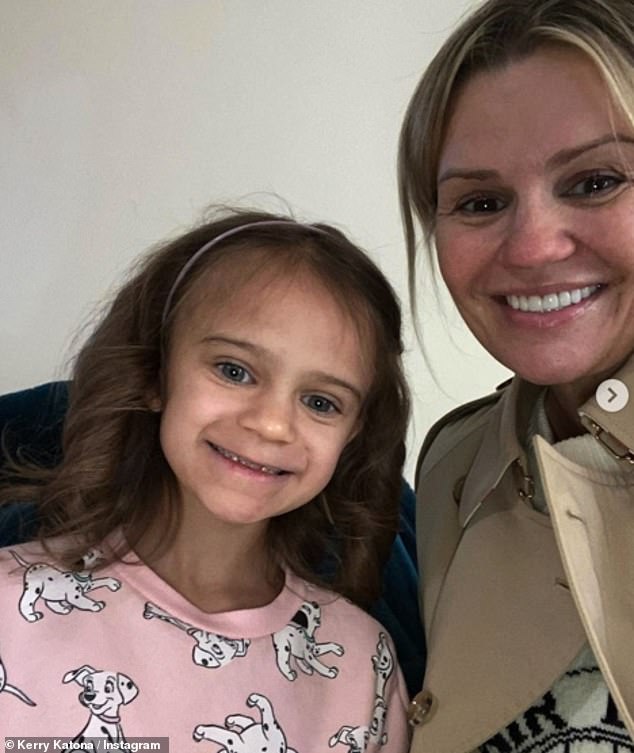 Mum and daughter: Kerry even revealed that she once hid in a cupboard with one of her daughters because she was so terrified (pictured with little girl Dylan-Jorge, seven)

Kerry has spoken about her relationship with George in the past, revealing in 2019 that she believed he would have killed either her or DJ if she had stayed with him and said their daughter had started spitting in her face as she copied her troubled father.

Earlier this month, The star tearfully told The Sun that she feels ‘anger’ over George’s ‘selfish’ addiction that has left their seven-year-old daughter without a father.

‘George is my baby’s daddy and she’s never, ever going to see him again and I’ve got so much anger towards him for that. I’m so angry,’ Kerry said in between tears. 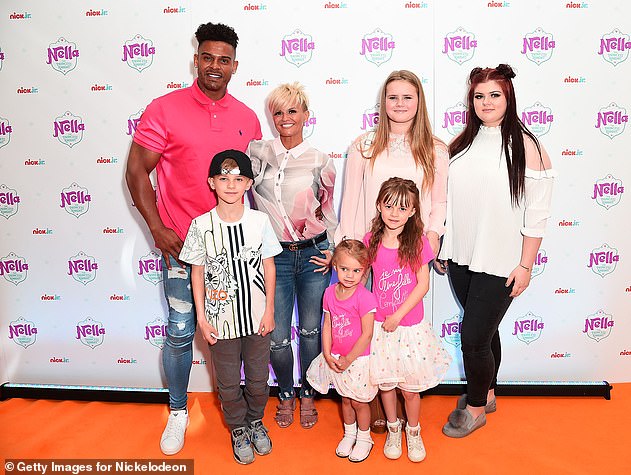 Children: Kerry also has Molly, 19, and Lilly-Sue, 18, with first husband Brian McFadden and Heidi, 14, and Maxwell, 13, with second husband Mark Croft (pictured in May 2017)

‘You become very, very selfish when you have an addiction.

‘He’s going to be missing out on so many wonderful things, because that kid is one amazing kid,’ she continued.

Kerry touched upon the domestic violence she claims to have suffered while she was with George during her appearance on Loose Women.

She said: ‘George had very many issues. By the time I’d worked all these issues out, I was already madly in love with him, we had a baby on the way. 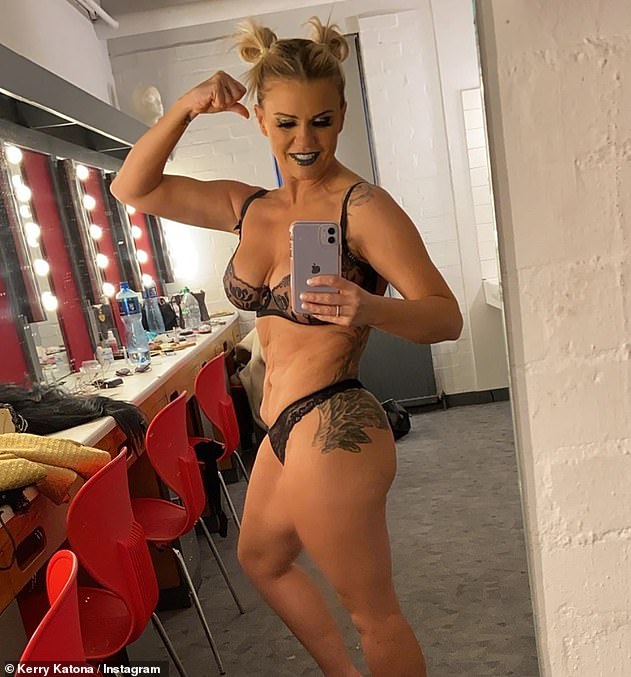 Sizzling: Kerry revealed to Ukrika her OnlyFans page has made its first £1million – and even encouraged her to make her own profile on the site (pictured in January)

Everyone tells you to walk away but you can’t. When I got a good hiding, I’d apologise to him.’

‘I feel guilty that DJ didn’t get to see her dad for a year, I really do. I’m not slagging him off, I would hand DJ over and I’d fear I wouldn’t get her back.

Kerry added: ‘I know if I’d stayed with George I’d be dead. I know it 100%. Or DJ would. I’m going to stand by that until the day I die. It was never going to happen [him change his life].’ 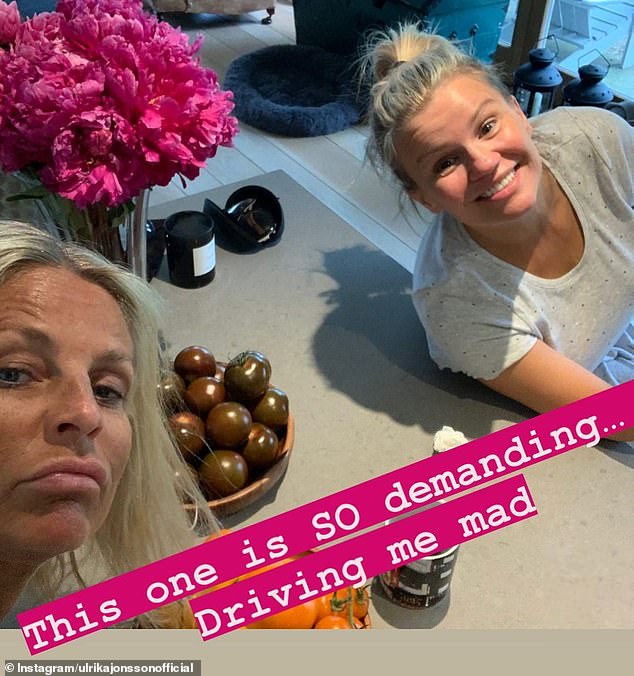 Honest: Kerry openly chatted to Ulrika for the interview, speaking on everything from failed relationships to them both having children with different men