She’s made headlines for her renewed romance with former fiancé Ben Affleck in recent weeks.

And Jennifer Lopez was spotted enjoying some family time on Saturday, when she took her 13-year-old son Max shopping in Beverly Hills.

The 51-year-old screen star rocked a western chic look with a voluminous patchwork denim skirt as she headed into a Ralph Lauren store. 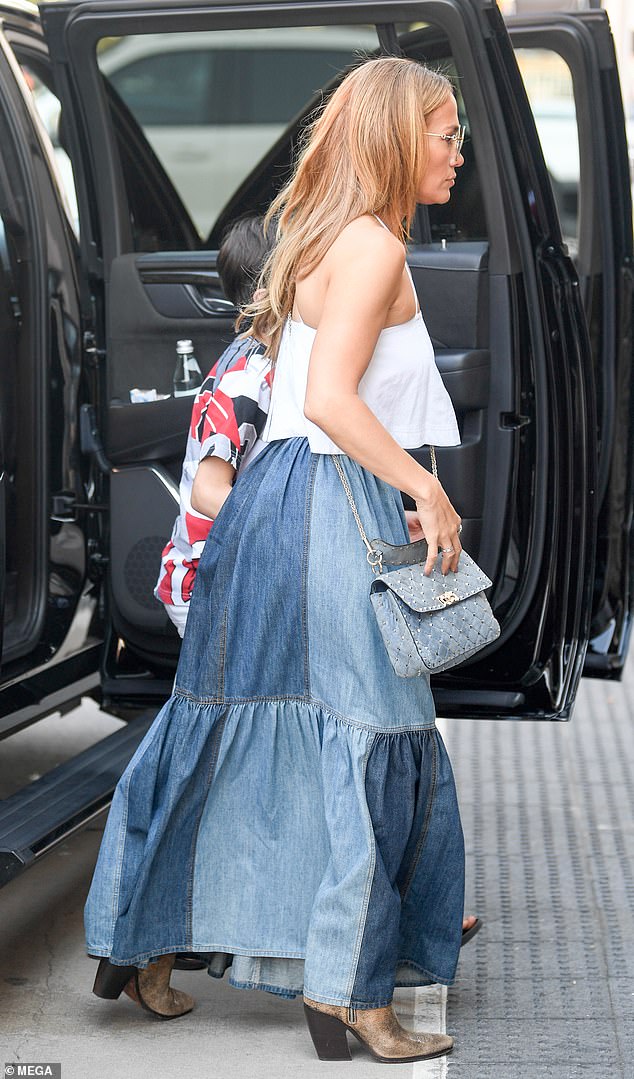 Mother–son bonding: Jennifer Lopez, 51, looked like a stylish cowgirl in a patchwork denim skirt as she took her Max, 13, shopping at a Ralph Lauren store in Beverly Hills on Saturday

Jennifer played up the cowboy style with a weathered pair of brown leather boots, and she matched her skirt with a quilted blue suede handbag.

She showcased her impressively toned arms in a white cropped tank top with spaghetti straps crisscrossing over her back.

The Hustlers star wore her caramel-colored locks down and accessorized with large sunglasses. 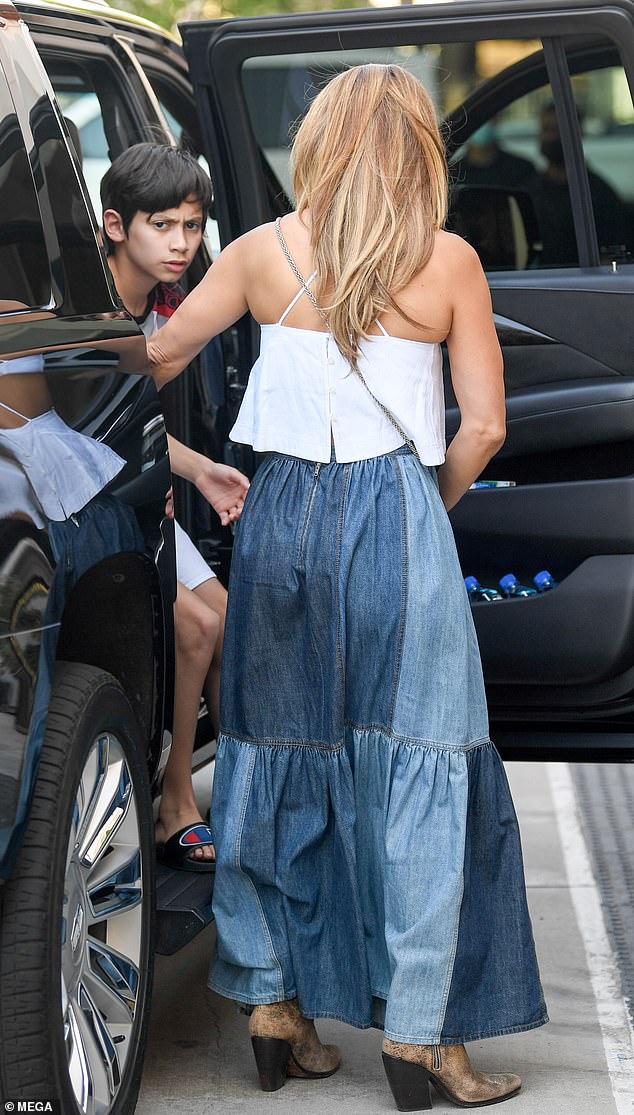 Fitting the part: Jennifer played up the western style with a weathered pair of brown leather cowboy boots, and she matched her skirt with a quilted blue suede handbag 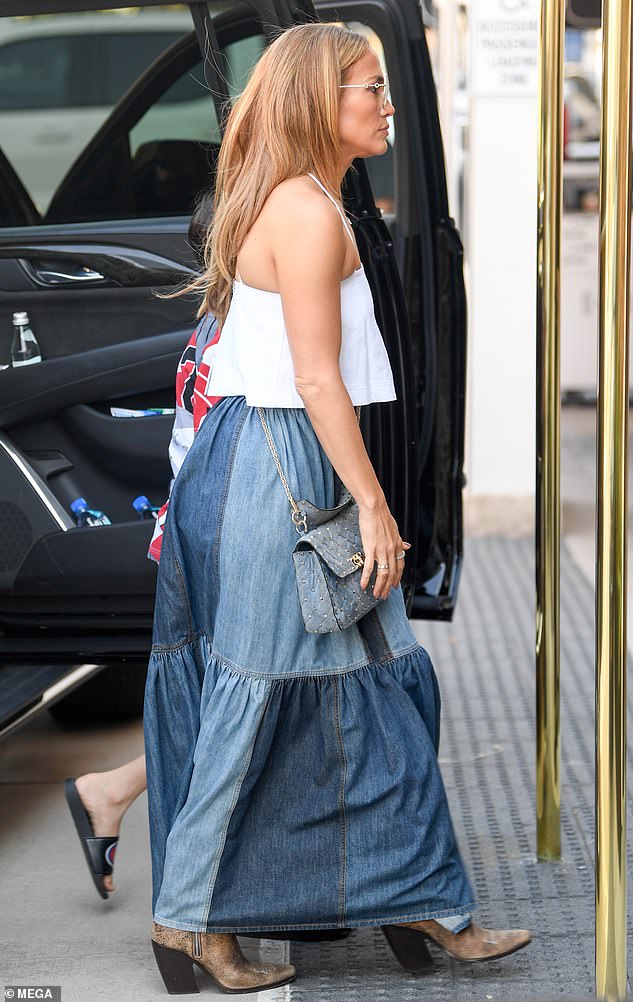 Stunner: She showcased her impressively toned arms in a white cropped tank top with spaghetti straps crisscrossing over her back

The two are normally based in Miami with their mother, but they’ve been traveling with her in recent weeks as she has spent more time in Los Angeles, reportedly to be close to Ben, who is said to be determined to stay on the West Coast to be near the three children he shares with his ex-wife Jennifer Garner.

Earlier this week, the Argo star and director was spotted having a steamy makeout session with J.Lo at the swanky Japanese restaurant Nobu Malibu during a dinner in honor of her younger sister Lynda Lopez’s 50th birthday.

The twins were both in close proximity and Max was even seen approaching the lovebirds just after they locked lips.

Despite the potentially awkward interaction, Ben seems to have already made a positive impression with the kids. 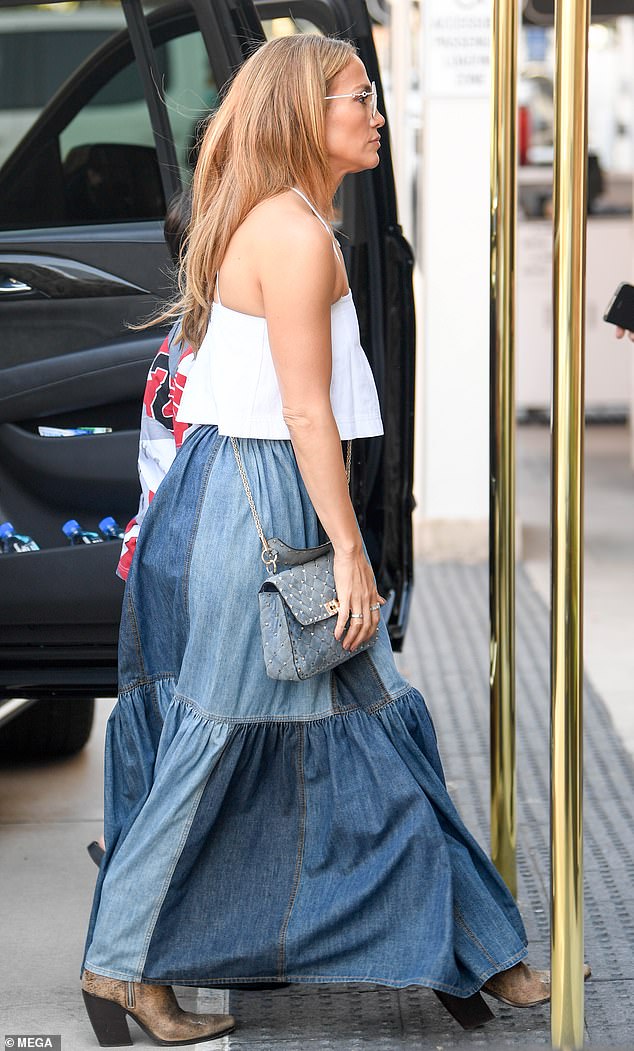 ‘Her kids really like Ben and think he’s funny and fun to be around,’ a source close to the Jenny From The Block singer told E! News earlier this week. ‘He’s totally won the family over with his charm.’

Another person at the party for Jennifer’s sister noted how easily the Oscar winner socialized with his on-again partner’s twins.

‘Ben was very good with them. He was asking them questions and smiling,’ an eyewitness shared. ‘He was very engaged and seemed to like hanging out with them. They all left together and Ben opened the car door for the kids and made sure they got inside. He was smiling the whole night and seemed very happy with the family.’

His charm assault also extends to the Out Of Sight star’s mother Guadalupe, who was seen spending some time in a Las Vegas casino earlier this month as he directed a film project. 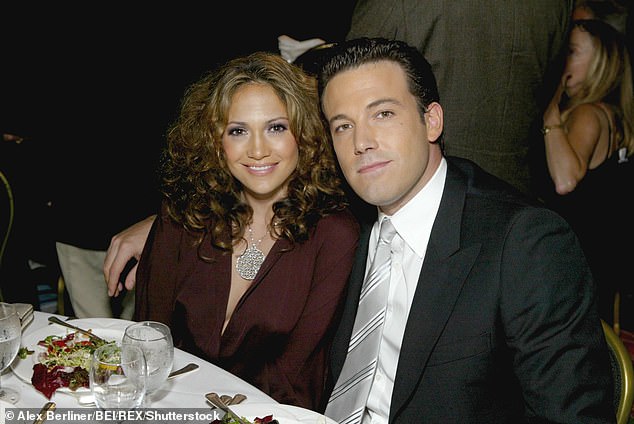 Beau: J.Lo’s twins have reportedly been won over by her beau Ben Affleck. ‘Her kids really like Ben and think he’s funny and fun to be around,’ a source told E! News; seen together in 2003

‘Guadalupe loves Ben and is happy that he is back in Jennifer’s life,’ a source told E! News.

‘They enjoy gambling together and have done it in the past,’ they added. ‘Ben had the opportunity to work in Vegas this week and she came out.’

Jennifer was seen on Friday being driven away from Ben’s home in Los Angeles’ Pacific Palisades neighborhood after spending some time together.

Their renewed relationship seems to be a kind of wish fulfillment for the actress, who sees Ben as ‘the one that got away,’ a source told Page Six earlier this week.

‘Jennifer always saw Ben as the one that got away. She was crushed after they broke up, though she felt at the time that she had no other choice but to call off their engagement,’ the insider said. 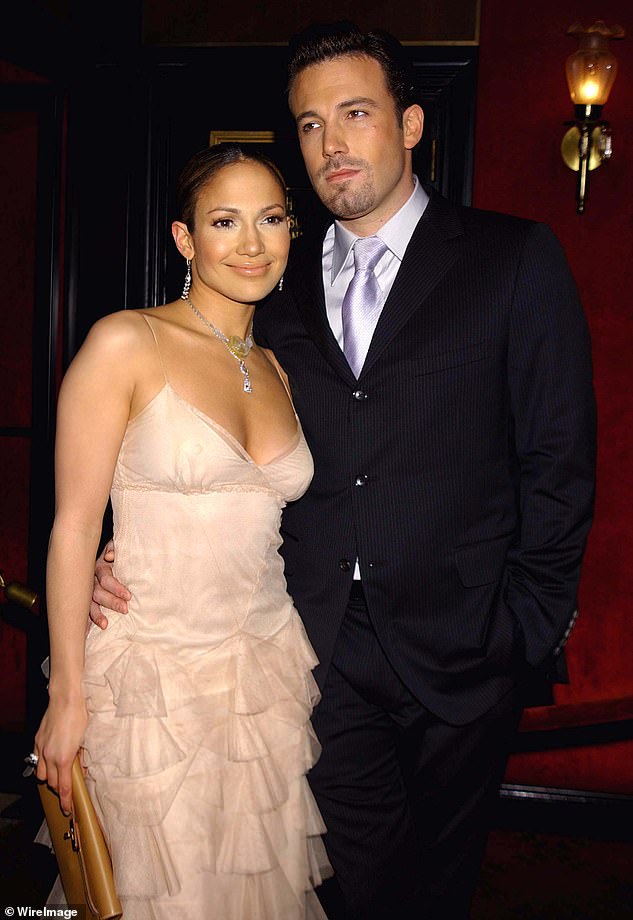 Rekindled romance: The singer’s new romance with Ben is a second chance, as  she saw him as ‘the one that got away’ after the 2004 break-up, a source told Page Six this week