Will this be the deal that breaks Elon Musk? He’s a risk-taker which has proven to be a good thing in many ways. Businesses like Tesla, SpaceX, and Starlink would have either failed or failed to launch successfully without him.

However, most of his businesses are also at risk, often because of Musk’s moves. For instance, Tesla sales appeared to drop off a cliff when Musk first announced his desire to acquire Twitter and make changes that Tesla buyers seemed to disagree with. This action showcased a relatively strong interrelationship between Musk’s behavior, good or bad, and the success of those businesses.

The Twitter acquisition is going to be ugly. It was already in operational trouble when Musk started his hostile takeover, which did further substantial damage to the company. Now he’s paying full price for something that was not only damaged, to begin with, but was damaged further by the first failed attempt.

Let’s talk about the good and bad (lots of bad) with this Musk/Twitter deal. On one hand, it could save Twitter. However, it’s more likely to begin a cascading failure across all of Musk’s firms.

We’ll close with my product of the week, a new discrete graphics card from Intel, the Arc A770 Limited Edition, that promises to shake up the graphics card market.

Thanks to some comments on “Dancing with the Stars” this month, I was thinking about the “Bridgerton” TV series this week. It is a light drama that revolves around the old English matchmaking method.

In that framework, Musk would be the noble who decided to wed the daughter of another noble who was in financial distress, regardless of the other noble’s or daughter’s wishes. Musk then uses the threat of doing even more damage to his prospective in-laws, forcing them to agree with the union. Then he changes his mind and bad-mouths the family, especially his potential bride, to a degree where no one else will marry her.

The disparaged family takes him to task in front of the Queen, who appears to favor the bride’s family, and Musk then decides he will go through with the wedding. The Queen is happy, and the bride’s family is happy, but the bride now faces marriage with a man who doesn’t know her, has clearly decided he doesn’t want her, and will likely be abusive to her.

Think of Twitter’s rank-and-file employees as the bride. They have been vilified by their prospective new CEO, have no real say in the acquisition, and are likely a tad focused on either leaving the company or making Musk’s time at the helm a living nightmare.

There is no doubt in my mind that Musk is aware of the problem, meaning he’ll be motivated to cut very deeply. But he appears to be planning to replace the departed workers with automated technology, given his focus is on finding someone that can code to run the place for him.

While not a bad idea, the technology he needs doesn’t exist yet, meaning he won’t be able to backfill in a timely way, making it likely that Twitter could collapse due to inadequate staffing.

In short, a Bridgerton-like ending, where the two sides discover they love each other after all and live happily ever after, is unlikely.

Musk is spread thinly across his companies, each of which should be enjoying the full attention of its CEO. In effect, he is more of an operational chairman of the board in that he delegates the running of his firms and just steps in when the need, or his interest, drives him.

Twitter lives off advertising revenue. In effect, it is a marketing construct. But Musk, while an expert at manipulating opinion, hasn’t shown any competence in marketing, so a business that depends on advertising revenue to survive is far removed from his skill set.

All of Musk’s other high-profile companies make money by selling products or, in the case of Starlink, services. Ad revenue-dependent companies are very different beasts because the people you serve are the firm’s product, while the customers are the advertisers who want access to them.

Musk’s plan to open up Twitter again to those that were banned as a result of violating Twitter’s rules will create a problem for advertisers and could reduce Twitter’s related revenue precipitously.

Musk primarily exists under the image that, though he does crazy things, he is very successful and incredibly lucky, making it unwise to bet against him.

This is problematic if Twitter fails because it is a high-profile company, and the nature of this acquisition attempt already showcased that Musk is anything but infallible.

Should it fail, Musk’s reputation for success will take a significant hit, reduce his ability to get venture capital going forward, and potentially damage the brands of the firms he currently oversees.

Instead of giving Musk a pass, the media and individual investors will likely see Musk differently than the successful leader he and his people have worked so hard to create.

Further, if a significant number of people object to Musk’s Twitter redesign, which seems likely, Tesla sales could again take a big hit. This comes at a time when electric vehicle competition is going near vertical.

Twitter is in deep trouble. It was in trouble before Musk’s bad decision that made things worse for the company. To fix something complex like Twitter, sometimes you need to strip it down to the basics and rebuild it almost from scrap. Whether this is intentional or not, Musk is effectively doing that, and his effort could result in a company that is easier to manage.

Since Musk doesn’t seem to understand advertising, once private, taking Twitter into a fee-based model might be a way to focus the service on its users rather than its advertisers. If the pivot is successful, the result should be a communications service that better serves the needs of its subscribers.

Musk has hinted at something called “Application X,” which may be a Microsoft Office-like application that aggregates much of the social media activity and communications into one application. Depending on the makeup of Application X, that could become a massive threat to Facebook and Google, the most likely companies that Application X would target. It might provide both of those firms with much-needed competition to focus them back on their core markets.

Musk’s decision to buy Twitter is terrible and has the potential to sink a number of his other companies, most notably Tesla.

The most brutal hit will be Twitter’s employees, who are not only unsupported by Musk but are likely to be laid off by him. It should be obvious to most that leaving will be better than staying, effectively turning Twitter into a shell of the remaining employees over a very short period. With the job market cooling, those who move soon will likely have the most luck finding a new job.

Musk’s moves to restore those banned by Twitter should drive up Twitter usage and cause advertisers to abandon the platform to avoid brand damage. Musk could mitigate this result if he changes Twitter from an ad-supported to a user-supported revenue model.

At $349, the Intel Arc 770 Limited Edition with 16 GB of memory seems like a considerable value for a discrete graphics card. For the right users, it may well be.

I will again provide my advice when it comes to something this new in technology: you don’t want to be the first to use it unless you are willing to accept some initial pain.

Any brand-new technology will have compatibility problems. This product won’t be any different, though initial reports indicate that those problems revolve around older game titles for the most part, where the card’s features will likely not work well. It may still outperform cards that are over two years old, but if you’re running current AAA games, it seems to handle those just fine.

Intel’s graphics technology isn’t yet competitive with AMD or Nvidia at the high end, but the card appears to be competitive at this price point. As a limited edition with a nice industrial design, it may be acceptable to gamers and PC users who want a discrete card but are on a tight budget. This card provides a path to buy the highest-end card from Intel at an affordable price. 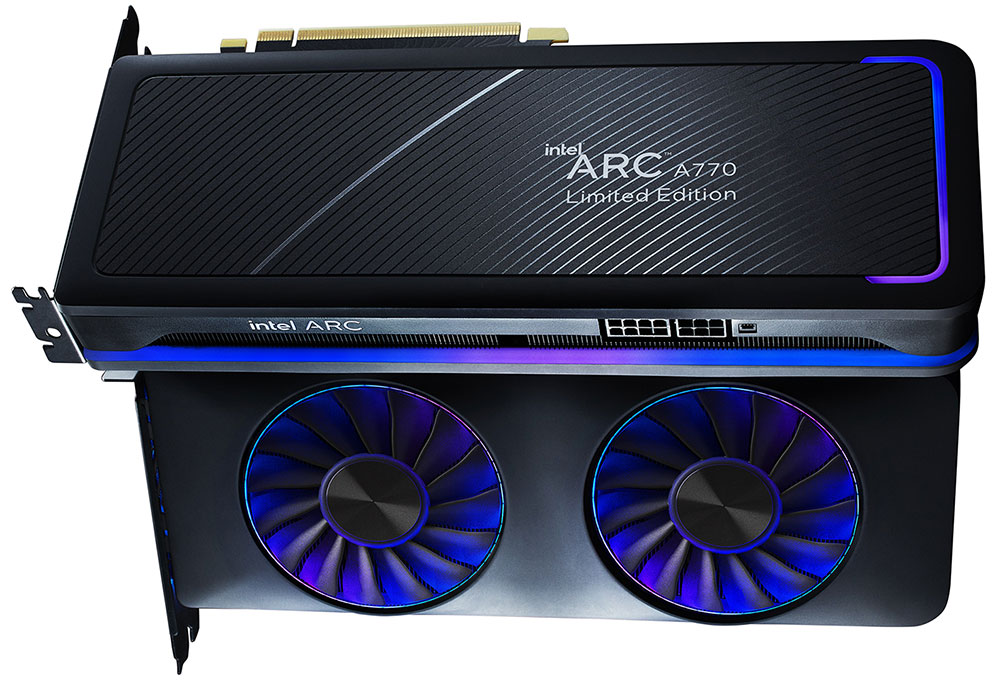 Be aware this card comes in two versions that are only $20 apart, making me wonder what idiot would buy the cheaper card. The difference is memory, and you may not need the extra 8 GB of memory on the more expensive card, but with no way to upgrade a card with 8 GB to 16 GB after purchase, paying that $20 upfront makes a ton more sense.

The card is set up for overclocking, initially pulling 225 but wired to pull 300 watts. One interesting strategy in this card is to provide features like upscaling (XeSS), Smooth Sync, Speed Sync, and Arc Control at this attractive price point. Often, features like this show up in cards costing around twice as much).

PCMag has done the most comprehensive set of benchmarks I’ve so far seen on this card. It performed competitively in its price range and best when the title could access the card’s advanced features. For instance, games like Red Dead Redemption 2 and Shadow of the Tomb Raider that use the XeSS upscaling feature performed very well with this card.

However, as I noted above, it struggles with legacy games such as Far Cry 5 and Rainbow Six Siege, for instance. So, until those games get updates, another choice will likely serve you better if you primarily play legacy games and not new titles.

For someone who’s okay with being an early adopter and plays more new games than old, the Arc A770 looks like a decent value and a solid initial product from Intel’s new graphics group, which is why it’s my product of the week.