The month of May has passed and we have somehow already made it into June. While the month may be over, there were some hot news topics that took the Korean entertainment industry by storm. So let’s take a look at the 9 hottest news topics for the month of May, as provided by DALGONA on Instagram! 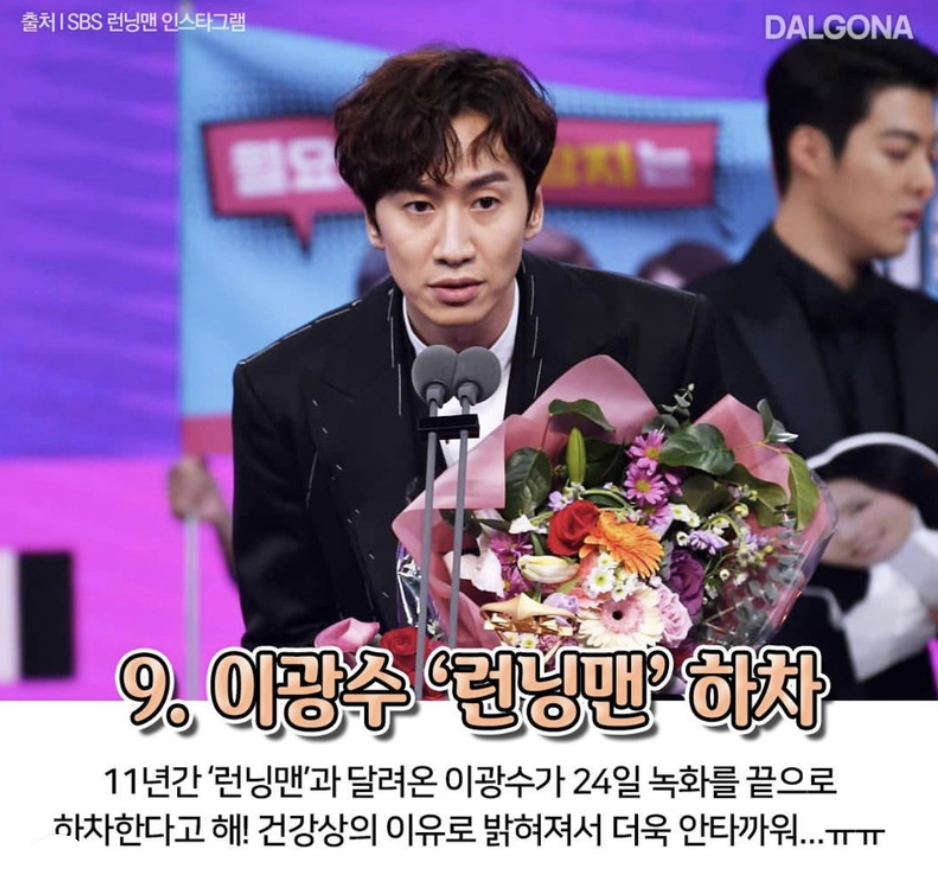 Starting off our list is the sad news of Lee Kwang Soo and his official departure from Running Man. The show, which aired back in 2010, has been credited as the start of Lee Kwang Soo’s career, as well as his popularity. The actor has been with the show from the start, growing with the program for the past 11 years. His comedic antics and banter with the other Running Man members has become one of the most notable parts about the show. He made the difficult decision to leave the show, however, to focus on his ankle injury recovery, which he sustained from a car accident back in 2020. This news shocked the nation since Running Man has been one of South Korea’s most popular programs since its release, with Lee Kwang Soo as one of the main pillars of the show’s success. 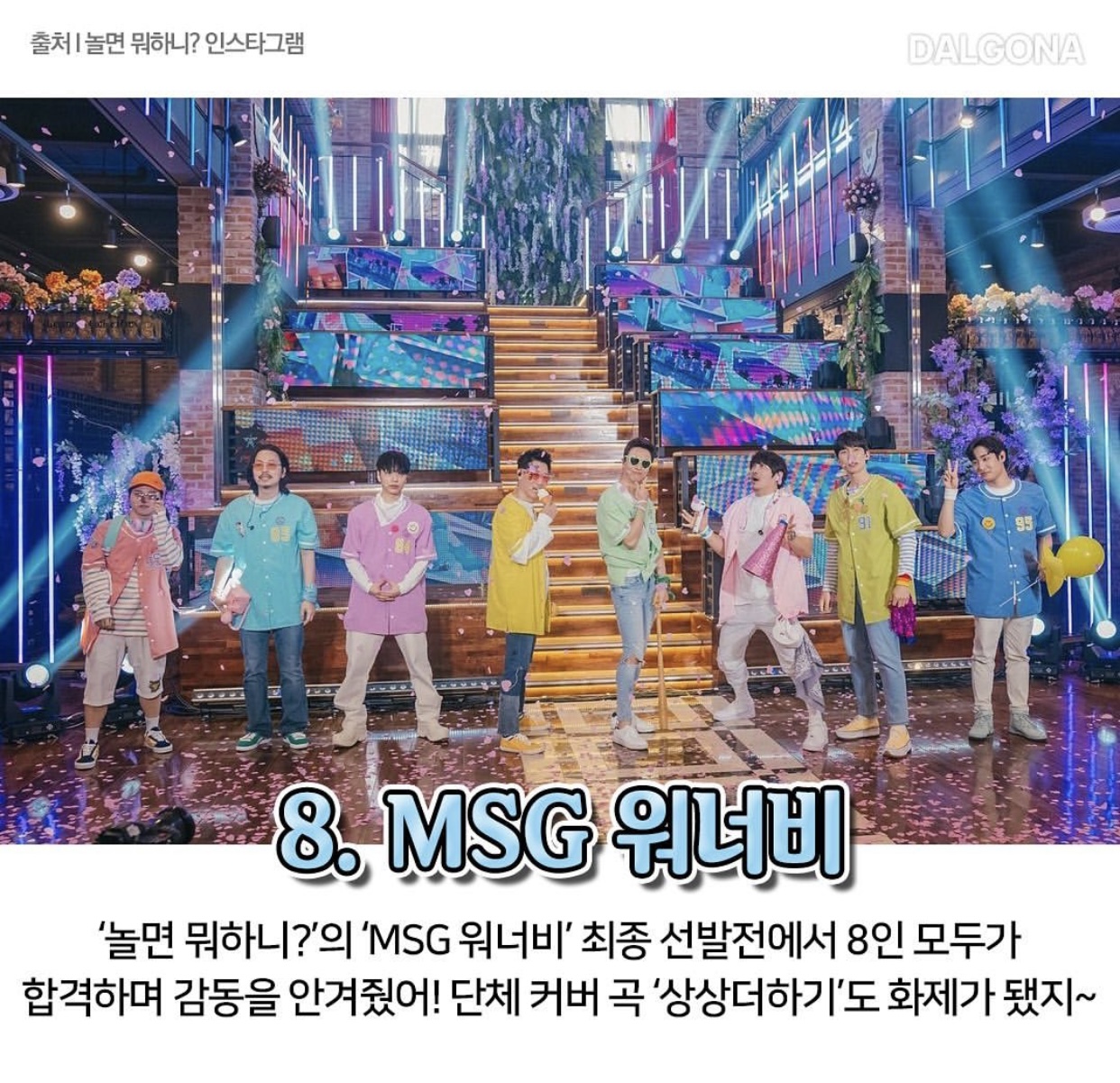 Next up on our list is MSG Wannabe, which is a project boy group created by Hangout With Yoo. MSG Wannabe was formed on the MBC variety program and was created following the real vocalist group, SG Wannabe as an inspiration. After SG Wannabe’s appearance on the show, they went on to see popularity like they have never seen before, as their songs began to re-chart on music ranking websites. With SG Wannabe’s newfound popularity, the excitement behind the project boy group grew, as they “scouted” 8 members to promote as MSG Wannabe. Simon Dominic, Ji Suk Jin, KCM, Lee Dong Hwi, Lee Sang Yi, Parc Jae Jung, Wonstein, and Kim Jung Min made it into the final lineup and began to promote as a “boy group.” 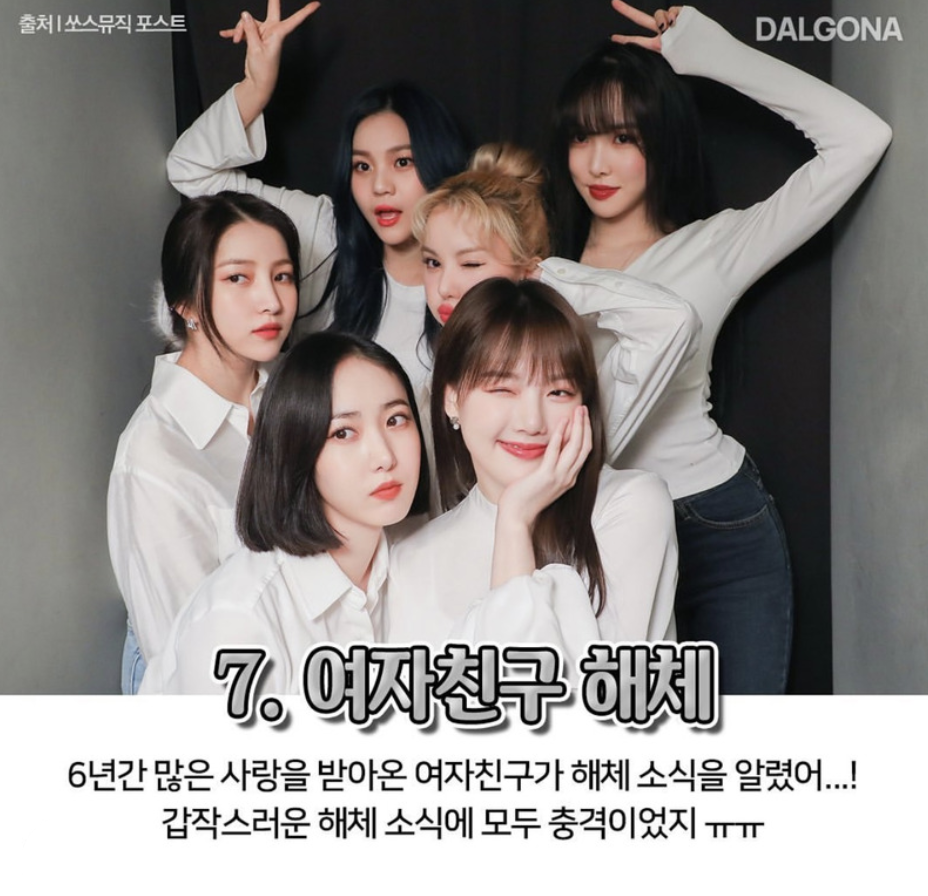 Perhaps one of the most shocking news that happened in May is the news of GFRIEND and their contract expirations. On May 17th, Source Music confirmed that all 6 members of GFRIEND would be leaving the label after failing to agree on contract renewals. This news shocked the nation as it was delivered to the public abruptly, with no warning given. After the news went public, the 6 girls shared handwritten letters onto their Instagram accounts, relaying the sad news to all their fans. Many GFRIEND fans were excited for their future promotions, as Source Music had recently been acquired by BTS‘s label, HYBE Corporation (formerly known as Big Hit Entertainment,) which may be why the news came as an even bigger shock. 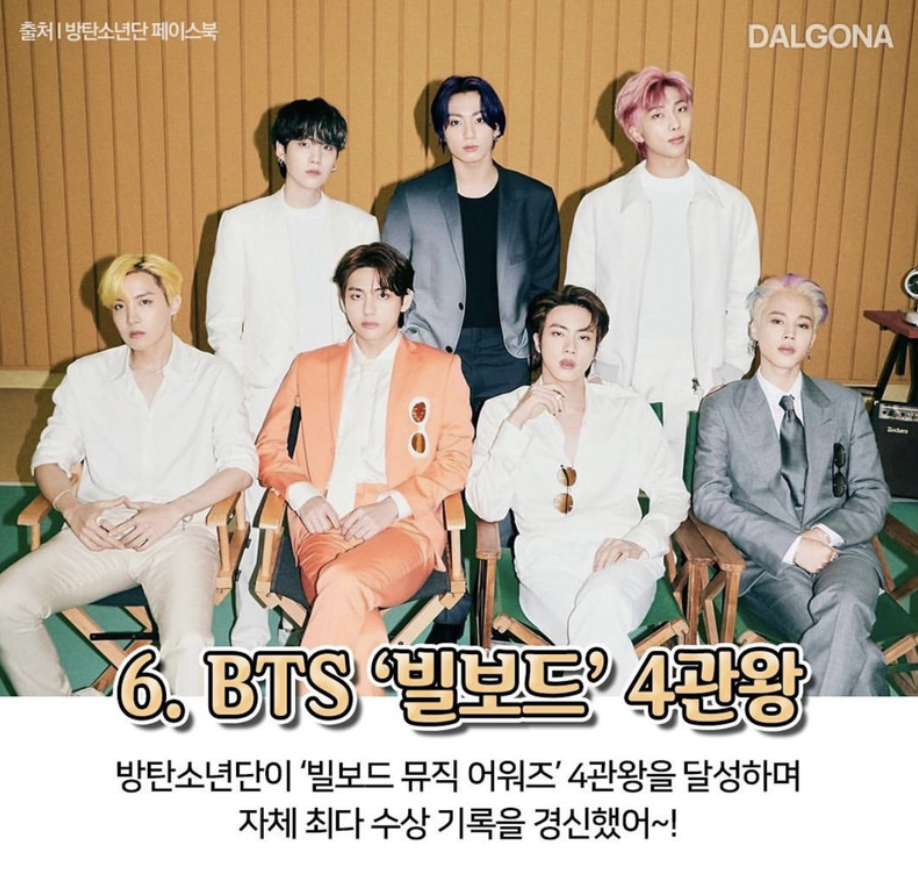 Coming in hot at number 6 on the list is BTS‘s amazing accomplishment at the Billboard Music Awards. The worldwide boy group was recently nominated for four different awards at the American music awards ceremony, breaking a record as the first South Korean artist to do so. Not only that, but they broke another record after securing the win for three out of the four Billboard Music Awards nominations. They won the award for Top Duo/Group, Top Song Sales Artist, and last but not least, Top Social Artist. While BTS has won the award for Top Social Artist before, as they have won it the past 5 years, their awards for Top Duo/Group and Top Song Sales Artist became a first for the 7 members.

Actor Ahn Jaehyun‘s return to variety television was the fifth highest ranking topic for May. He made his highly anticipated return, making his comeback on the spin-off show of New Journey to the West, Spring Camp. His return made headlines due to his former divorce controversy with his ex-wife and actress, Goo Hye Sun. While the start of the former couple’s divorce seemed amicable, it became messy when Goo Hye Sun accused Ahn Jae Hyun of infidelity. The nation quickly turned their backs on Ahn Jae Hyun, which led to his departure from New Journey to the West and his temporary hiatus. After almost two years away from variety television, Ahn Jae Hyun made his return with Spring Camp, exciting his fellow cast-mates and fans. 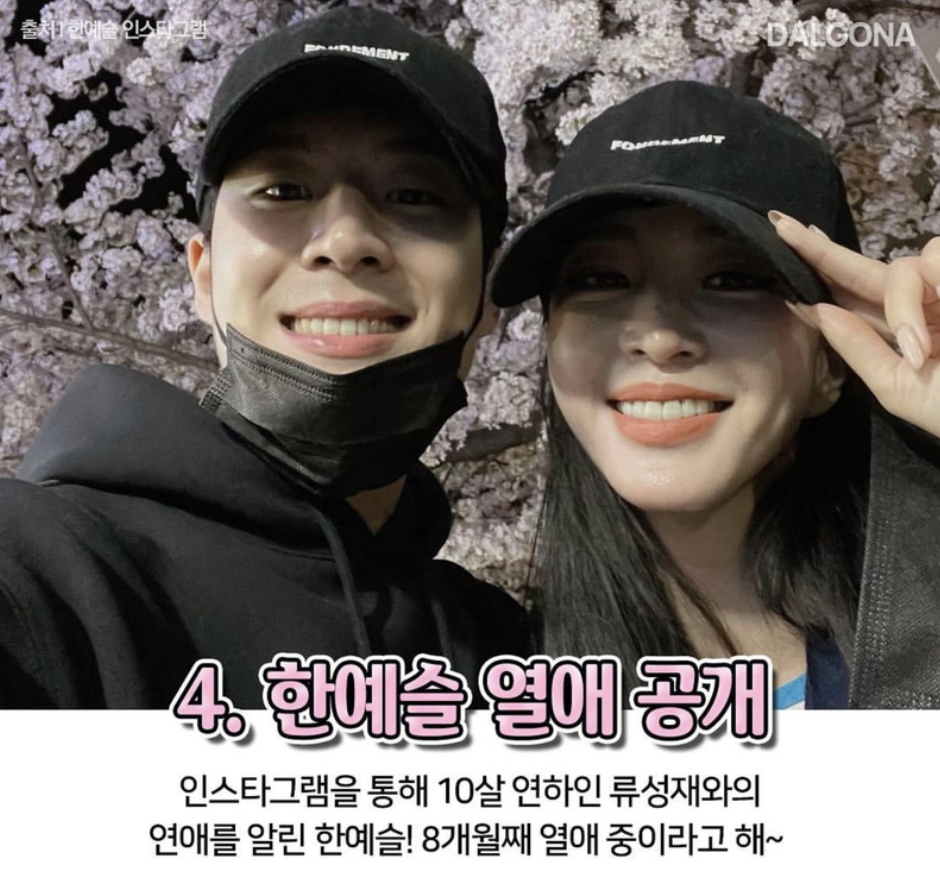 Actress Han Ye Seul and her surprising boyfriend reveal was the fourth hottest topic for the month of May. The actress personally shared with her fans that she was in a relationship with a non-celebrity boyfriend on her Instagram account. What made the news even more shocking is the fact that Han Ye Seul revealed his face, exciting all of her fans! The actress and her boyfriend have been in a relationship for 8 months and share a 10-year age difference between the two. This quickly made headlines all throughout the nation as celebrities barely admit to their relationships, let alone reveal it on their own. 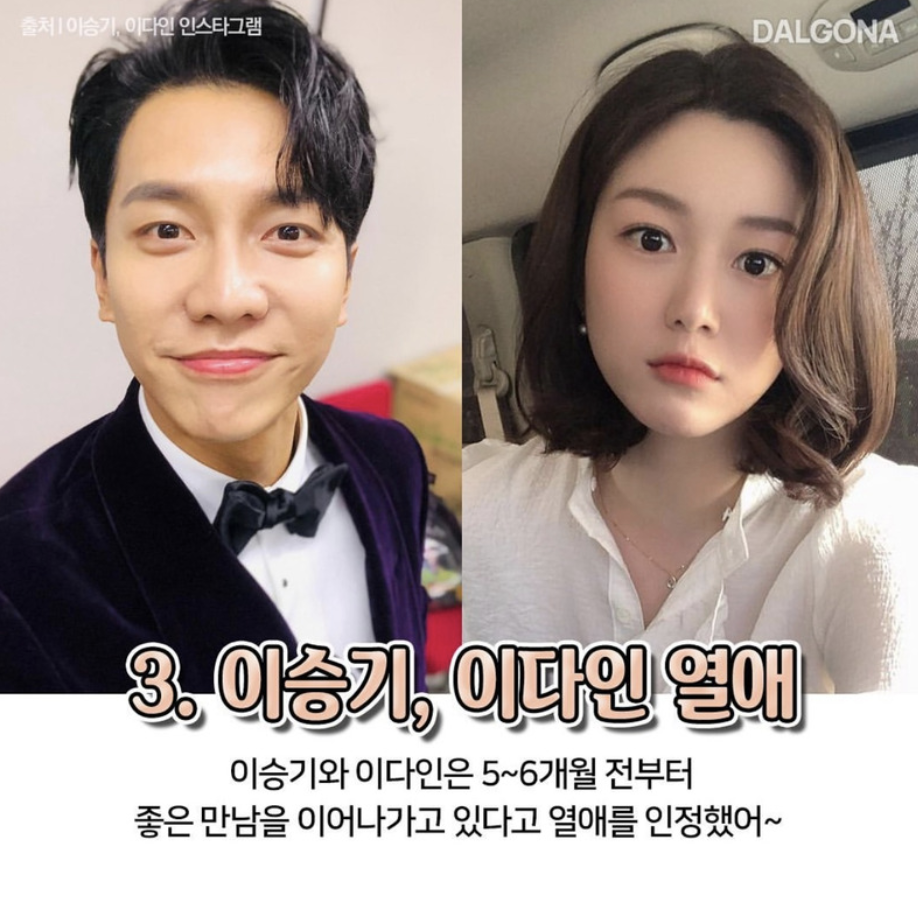 Unsurprisingly enough, Lee Seung Gi and Lee Da In‘s relationship news makes it onto this list. The two actors confirmed their relationship after Dispatch photos of the two quickly began to circulate online. According to their respective labels, Lee Seung Gi and Lee Da In initially met as industry co-workers, but began to develop feelings for one another as time went on. They transitioned their relationship into a romantic one and have been dating for approximately 5-6 months. The couple is said to share a common interest in golf, which only further catapulted their romantic interest in one another. 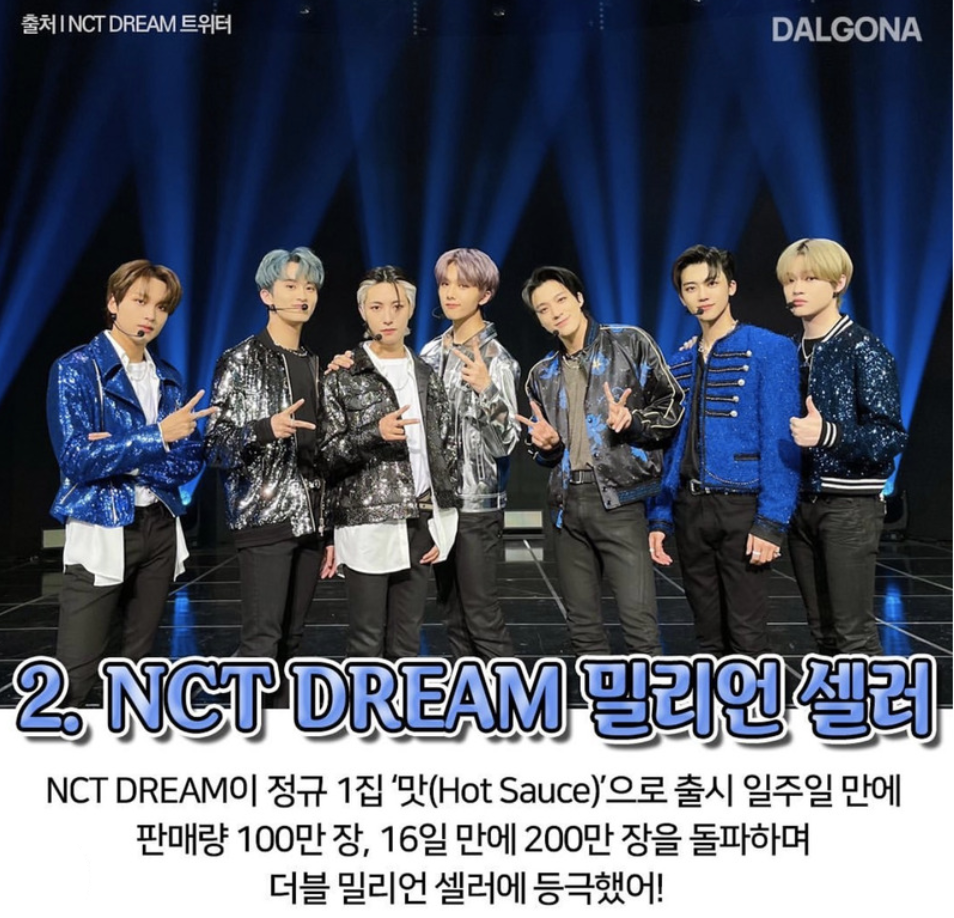 NCT DREAM makes it onto this list at number two for their incredible record breaking news! The SM Entertainment boy group released their debut studio album on May 10, 2021 and it took the nation by storm. Their album excited fans, not only due to it being the group’s first studio album, but also because it marked their first comeback since 2018. Their album, Hot Sauce broke record after record as it went on to exceed 1.7 million copies for the preorder. They officially went on to sell over one million copies of Hot Sauce in the first week of its release, which is a mind-boggling achievement. However, their achievements don’t end there as in just 16 days, NCT DREAM went on to sell over two million copies. 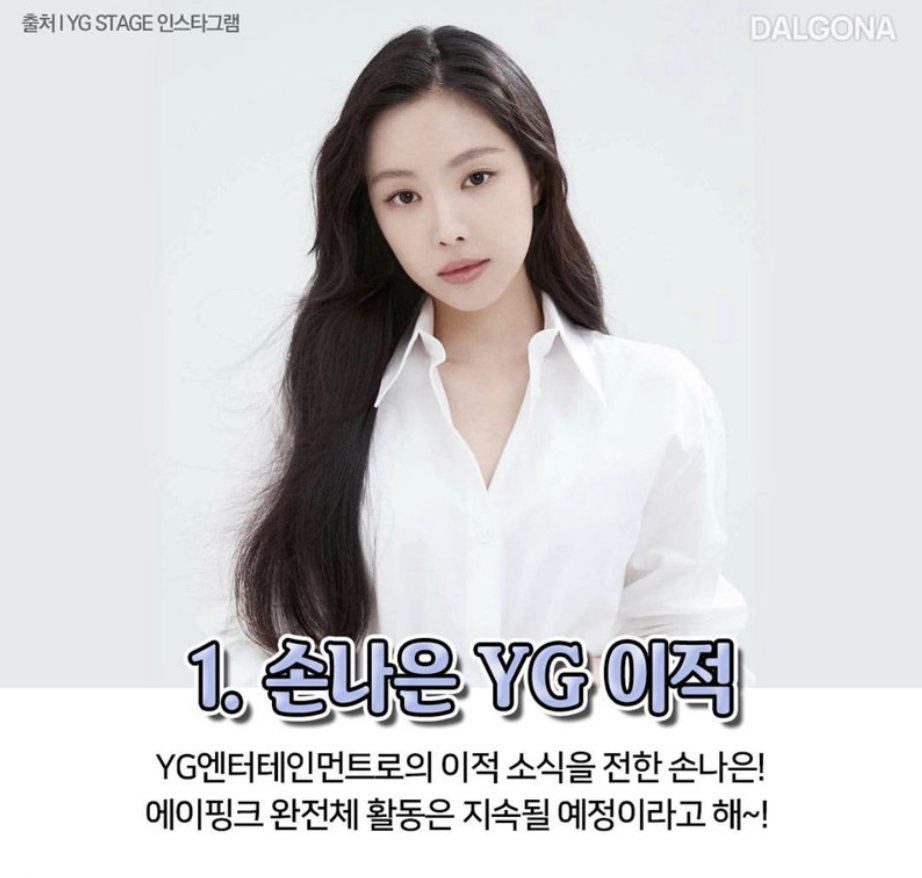 Last, but most definitely not least is the number 1 hottest topic for the month of May. The crown goes to Son Na Eun and her departure from PlayM. The Apink member surprised the nation when it was confirmed that she would be leaving PlayM after over a decade together. PlayM reported that while the other 5 members renewed their contracts with the label, Son Na Eun declined to renew, which led to numerous rumors about her future activities. A few days later, YG Entertainment confirmed that they signed Son Na Eun to their agency and was excited to promote her as an actress. While the news startled Apink fans, YG Entertainment and PlayM both confirmed that Son Na Eun would remain a member and would continue to join Apink for their future promotions.