Friendships between animal species is a topic near and dear to the hearts of animal-loving humans all over the world. There is just something exceptionally endearing about unlikely combinations of companionship that just nestles deep into our hearts and sprouts all the happy-feels.

Recently, we gushed over the dynamic duo of a dachshund (wiener dog) and a seal, and we certainly cannot forget the adorable friendship between this dog and duck, can we? The truth is, animal species find a way to get along far better than us humans tend to more often than we realize.

Perhaps the most iconic unlikely friendship of all time, however, is this trio of troublemakers.

Living together in harmony for 15 years: an American black bear, an African lion, and a Bengal tiger. Lions, tigers, and bears, oh my! Indeed. 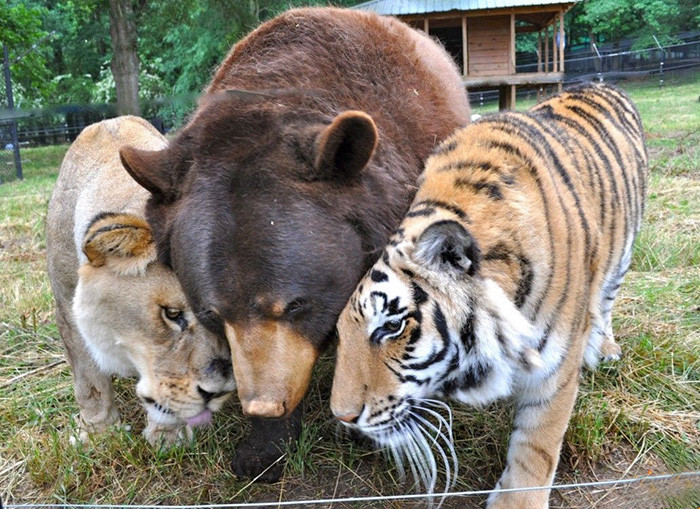 Baloo the bear, Leo the lion and Shere Khan the tiger. I mean, iconic names, really. The trio have been peacefully coexisting at Noah’s Ark Animal Shelter in Georgia, USA for a whopping 15 years now. 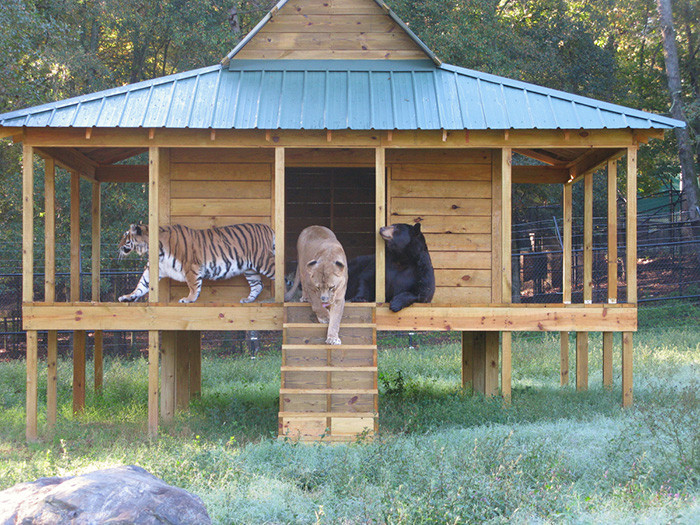 Prior to their rescue and placement at Noah’s Ark in 2001, BLT lived in the basement of a house in Atlanta in a devastating tale of severe animal abuse. The basement was in terrible condition and so were the wild animals. 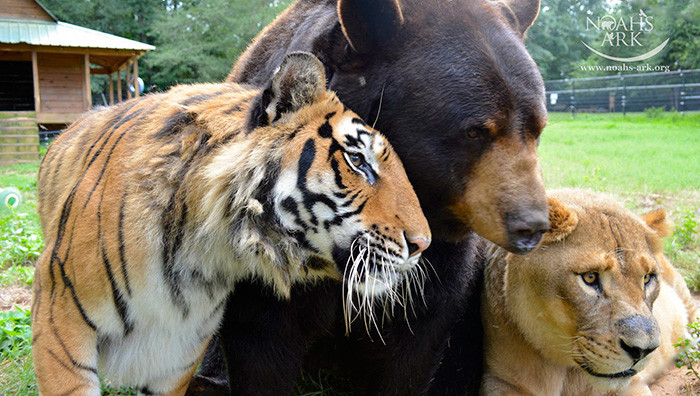 Baloo’s surgery upon rescue was he only time this trio has been separated.

They were cared for so poorly that upon rescue, Balloo had to have surgery just to remove an ingrown harness he’d worn for, well who knows how long. It had never been adjusted though, and his body grew around it. Horrifying, I know.

Each of these majestic animals is from a completely different continent.

They would literally never meet in the wild. 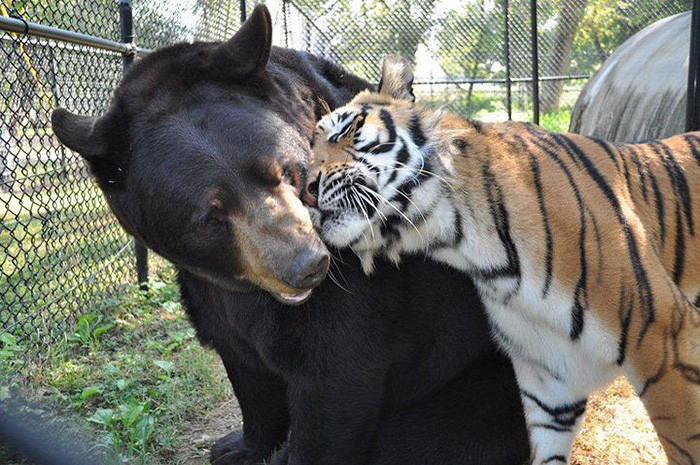 Noah’s Ark cares for animals in the hopes of rehabilitation and release, but not all the animals that come to them can be released.

BLT was such a case, so like other animals who could not be released, they became permanent residents of Noah’s Ark. 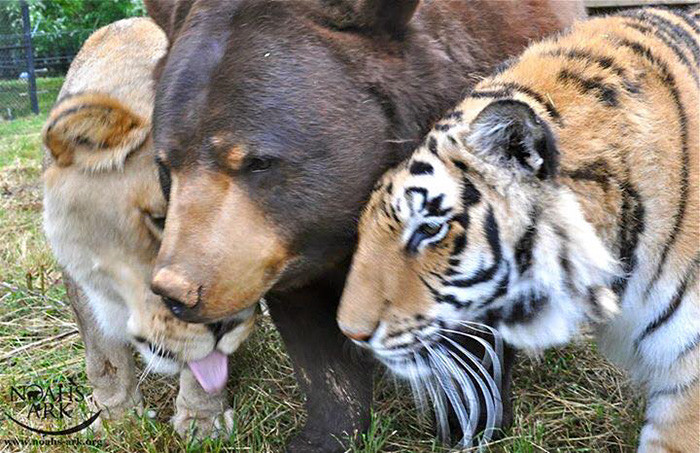 The non-profit organization opened in 1978 in Ellenwood, Georgia. 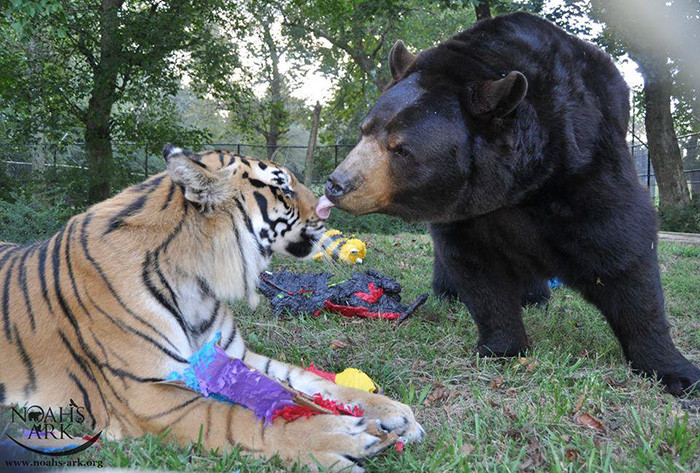 Noah’s Ark never charges admission to come and see the animals, but they accept (and appreciate) donations.

Animals and the people that visit Noah’s ark are treated with “unconditional love, unconditional service, and a future full of hope.” 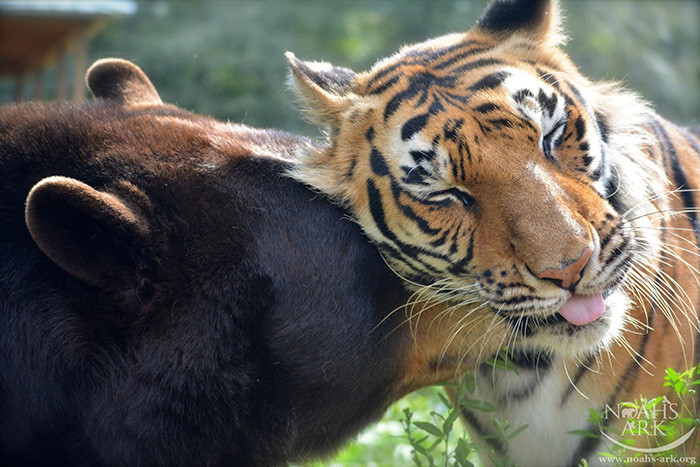 BLT is a rare trio indeed, and they seem to get along like brothers rather than significantly different animal species. 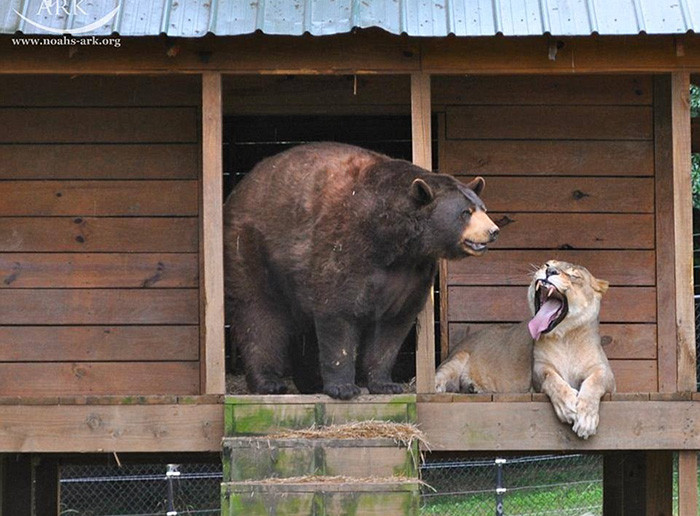 They will spend the rest of their lives being cared for at Noah’s Ark, but they don’t seem to mind. 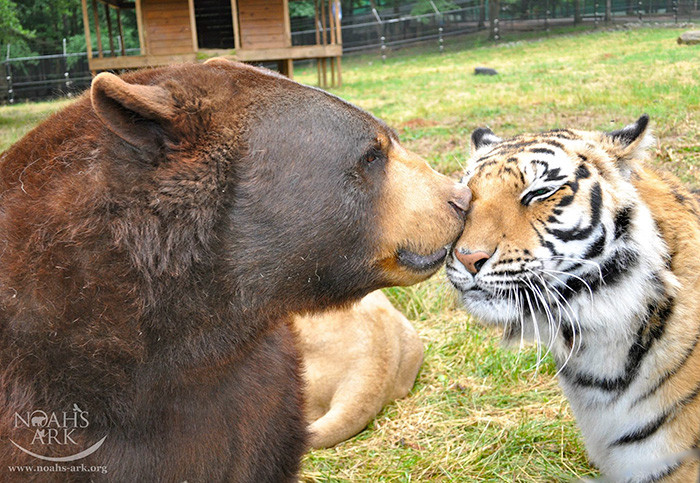 They are treated very well with lots of love and respect by this incredible organization. 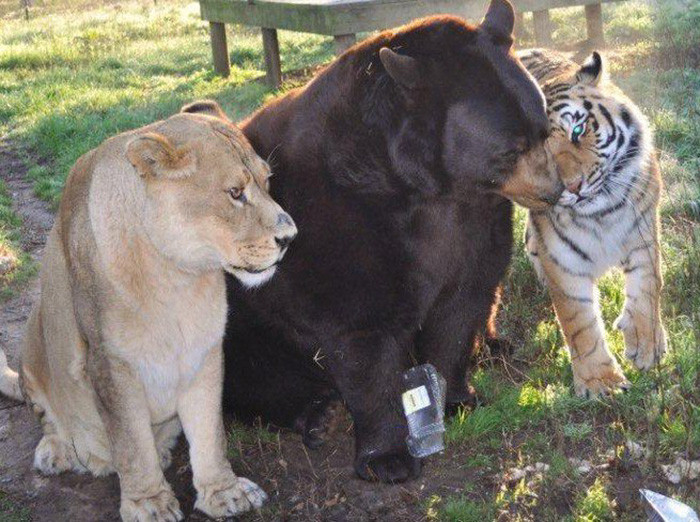 You might even say that retirement looks great on them. 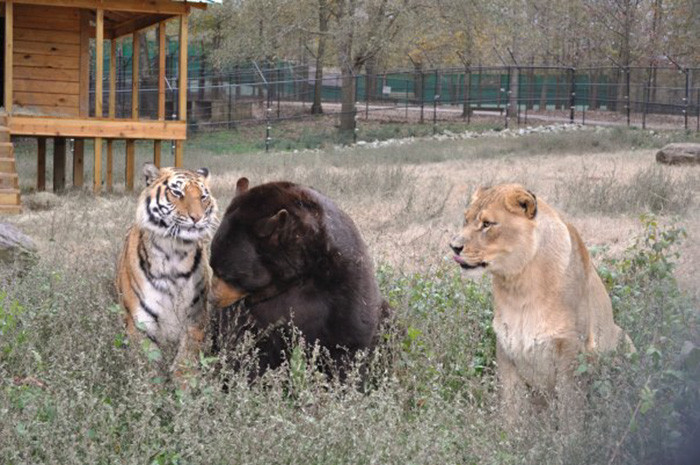 3 lionesses pounced on a crocodile in a remarkable scene after the reptile attempted to assault one of the pride’s cubs.

The safety women naturally jumped into activity to ward off the aggressive predator.

With arranged precision, the lionesses bordered the croc and released a vicious volley of strikes. 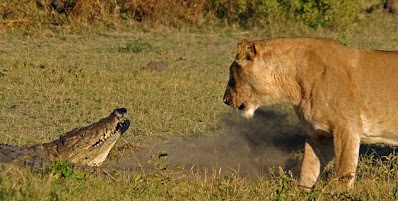 Throughout the experience the crocodile handled to attack among the big cats however was quickly defeteated by the satisfaction.

The uncommon scenes were captured by Tony Goldman while on a safari trip to the Duba Plains, in Botswana, with his boy.

Tony, 58, a cardiologist, claimed: ‘The lionesses had actually simply killed a buffalo and also suddenly a crocodile ventured about 100 lawns out of the water in the direction of them to treat on the meat.

‘ One of the smaller cubs remained in the path of the crocodile as well as it began to advance towards the cub in an enormous style before trying to assault it.

‘This resulted in an eruption from the three neighboring lionesses that opted for the croc in an ordered fashion.

‘ I anticipated the croc to back off but it didn’t and there was an incredible fight with the croc attacking one of the lionesses.

‘ There was a commotion as well as dirt flying everywhere before the lionesses lastly overpowered the intruder. 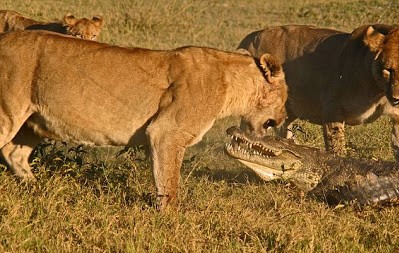 ‘The whole thing lasted around 15 minutes and was only witnessed by my boy, our driver as well as myself.

‘ We were actually fortunate due to the fact that the driver had actually driven like a maniac to arrive in time after we heard about the buffalo kill.’ Papa of 2, Tony, from Benoni, near Johannesburg, South Africa, added: ‘On my subsequent safaris I’ve discussed this experience to rangers with greater than 20 years in the shrub and no person has actually ever before seen lions remove a crocodile.

‘ It is most absolutely an extremely uncommon wild animals incident that we were lucky enough to see and also photograph.’ 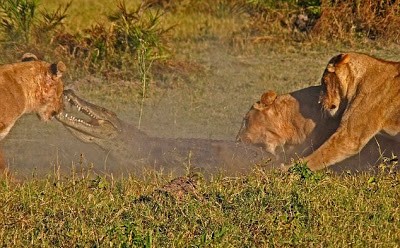 The crocodile reared in pain as the lioness struck a blow 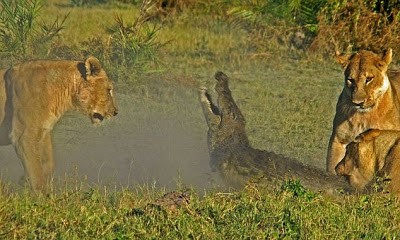