We can keep many animals as pets like dogs and cats which are commonly kept. But some people even like to keep parrots or snakes.

Very few times you might hear of Wolf kept as a pet. But here is the story of Kira which is kept as a pet. Kira was left by her mother when she was only 3 days old and could not have survived if Alida did not come to the єscuє.

The wolf was taken in, raised, and trained up like a dog by Alida so that she could have another chance at life. As wolves are wild and like dogs, they don’t have generations of domestication in their genes, so it was quite difficult to domesticate her.

Alida had to work extra hard as Kira was very careful of new things. She needed to be socialized so she met kids, adults, and other animals. 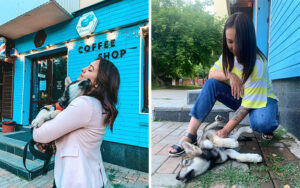 As hard work pays, thanks to Alida’s hard work, Kira is now fully domesticated. Earlier Kira’s mother lived with a family but they were unable to take care of her so she ended in a nursery. Kira is also born in the same nursery.

If Kira were to release in the wild, she would not have survived as no one taught her to hunt. Kira’s mother abandoned her when she was only 3 days old and in the nursery, she was fed by hand. Alida took Kira away when she was somewhat strong.

Alida adopted her when she was only 28 days old. She started making her more socialized by letting her see a huge number of dogs, people, and children. 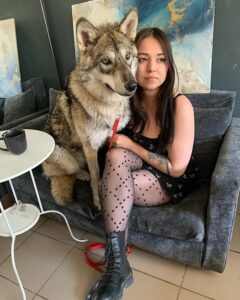 They walked in different places so that Kira could study different smells, hear new sounds. Wolves had to be trained properly to live in an urban environment with Alida.

Kira is now fully trained. She does not react to other dogs and treats children very carefully. When people see her on the street, they are fascinated by her and asked to be photographed. They even ask whether living with a wolf is safe or not.

But Alida is fully confident that Kira is now a trained dog.